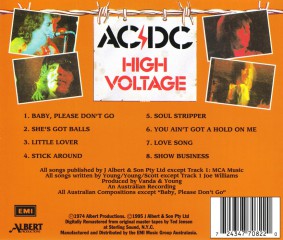 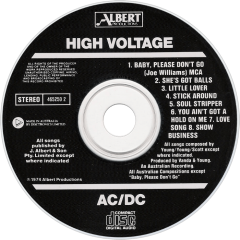 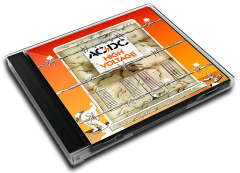 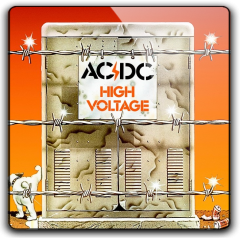 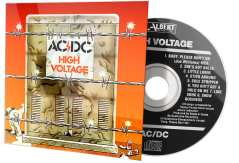 High Voltage is the debut studio album by Australian hard rock band AC/DC, released only in Australia, on 17 February 1975.

The album was produced by Vanda & Young at Albert Studios in Sydney, Australia. George Young is the older brother of Angus and Malcolm, and also plays bass guitar on a number of the album's songs. Harry Vanda was a bandmate of George's in The Easybeats, and the pair were the main songwriters of the band's later hits, including their international smash "Friday on My Mind".

When George Young heard what his younger siblings were up to, he was quite impressed, telling VH1's Behind the Music in 2000, "All of a sudden the kid brothers were still the kid brothers...but my God, they knew how to play. There was no sort of, 'Do they have it or don't they have it?' It was obvious that they had something."

AC/DC was still developing its sound when High Voltage was recorded in November 1974, and singer Bon Scott and the Young brothers were backed by a different rhythm section than the Mark Evans/Phil Rudd combination featured on their next three full-length studio recordings. Rob Bailey and Peter Clack were the band's bassist and drummer, respectively, at the time. According to Murray Engleheart's book AC/DC: Maximum Rock N Roll, bass duties were shared by Malcolm and older brother George, who also played live with the band infrequently, as well as Bailey. Clack played drums on "Baby, Please Don't Go", and the rest of the tracks were recorded by Tony Currenti. AC/DC biographer Jesse Fink laments Currenti's lack of recognition, noting that his name "doesn't bob up anywhere on the Australian or international releases of High Voltage, TNT, '74 Jailbreak, Backtracks or any other releases on which his playing may or may not have appeared." Malcolm and Angus traded-off lead guitar parts on "Soul Stripper" and "Show Business," and Malcolm played the solo on "Little Lover." In the book Highway to Hell: The Life and Times of AC/DC Legend Bon Scott, author Clinton Walker quotes Angus Young: "It was actually recorded in ten days in between gigs, working through the night after we came off stage and then through the day. I suppose it was fun at the time, but there was no thought put into it."