09) You Can't Always Get What You Want 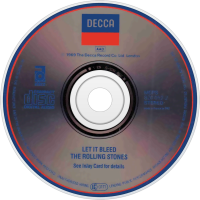 Let It Bleed is the eighth British and tenth American album by English rock band The Rolling Stones, released in December 1969 by Decca Records in the UK and London Records in the US. Released shortly after the band's 1969 American Tour, it is the follow-up to 1968's Beggars Banquet and the last album by the band to feature Brian Jones as well as the first to feature Mick Taylor.

User Album Review
If 1968's Beggars Banquet struck the template for the Stones as we now know them, Let It Bleed cast it in stone. Featuring some of their most iconic material (and a cake on the cover baked and decorated by Delia Smith), it's the record that featured original leader Brian Jones' final appearance and new guitarist Mick Taylor's debut with the band. It's a murky, dark and chilly record that, although assembled from sprawling sessions across 1968 and 1969, has greater unity than Beggars Banquet.
Gimme Shelter is a startling introduction, with Keith Richards' opened-tuned guitar circling like a bird of prey over the corpse of the 60s, and Mick Jagger's brooding vocal one of his very best. The Stones' subject matter had always seemed adult in comparison to, say, The Beatles, but on this opening track, they were bleak and portentous; a tale of rape and murder being "just a shot away".
Although Country Honk is a trifle pointless, Monkey Man is a sinister update of the blues. Midnight Rambler, often extended to snapping point live, referenced the serial killer the Boston Strangler. You Can't Always Get What You Want concludes the downbeat air surrounding the record, beginning with the angelic voices of the London Bach Choir and ending in a climatic cacophony.
The shows to accompany the album placed the band in the new world of the scaled-up 'rock' tour. The performances climaxed at the Altamont Speedway in San Francisco. The subsequent death of Meredith Hunter at the hands of Hell's Angels exposed the Stones to be out of their depth in the world of devil-courting rock'n'roll.