11) My Friend of Misery
12) The Struggle Within 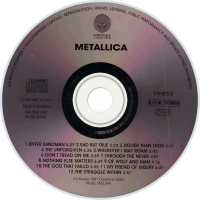 Metallica (also known as The Black Album) is the eponymously-titled fifth studio album by the American heavy metal band Metallica. It was released on August 12, 1991 through Elektra Records to critical acclaim. Metallica produced five hit singles that are considered today among the band's best-known songs: "Enter Sandman", "The Unforgiven", "Nothing Else Matters", "Wherever I May Roam", and "Sad But True". The band promoted the album with a series of tours. In 2003, the album was ranked number 252 on Rolling Stone's list of The 500 Greatest Albums of All Time. The album marked a change in the band's sound to one less harsh than the thrash metal style of their previous four albums.
The recording of Metallica was troubled, with the band frequently entering conflicts with Bob Rock, the band's new producer, during production. The album debuted at number one in ten countries, and spent four consecutive weeks at the top spot of the Billboard 200, making it Metallica's first album to top album charts. Metallica is the group's best-selling album, selling 30 million copies worldwide. It is the best-selling album of the SoundScan era. The album was certified 15Ã— platinum (diamond) by the RIAA on November 13, 2009. On November 10, 2011, Lars Ulrich revealed (on Zane Lowe's BBC Radio 1 show) that Metallica will be playing the album, in its entirety, during the 2012 European Black Album Tour.

Album Review
Any attempt to move away from a tried and tested formula is often met with resistance by some fans who never want their idols to change. Smarter than your average heavy metal band, the more complex turn-on-a dime twists of their previous albums, Master Of Puppets and 1989’s And Justice For All, were trimmed back in favour of a more honed-down delivery.

Though the band didn’t always see eye to eye with Bob Rock (who had previously cut his teeth engineering for the likes of Bon Jovi before producing Motley Crue’s Dr.Feelgood), the tensions between the two camps resulted in an album bursting at the seams with alternative ideas.

Sure enough, accusations that they had sold out came from the rump of hardcore fans within seconds of their fifth album being released in 1991. Several years later thousands of fans signed an online petition calling on the band to sever its links with Bob Rock such was their conviction that their beloved Metallica had strayed from the straight and narrow.

Yet his involvement gained them mass sales (number one on both sides of the Atlantic) and earned them the Grammy they’d missed out on, having lost out to Jethro Tull’s Catfish Rising the previous year. With millions of new fans going on to discover their back catalogue, Metallica moved from cult metal gods to bona fide rock stars, straddling the airwaves with the psycho-dramatics of “Enter Sandman”, whose terse motifs served notice that things were changing.

The spaghetti western set dressing of “The Unforgiven”, “Nothing Else Matters” with its sensitive lyrics and string section embellishments, as well as the widescreen dynamics of “My Friend Of Misery” demonstrated how keen they were to move things on. In “The God That Failed”, vocalist, rhythm guitarist and principle writer, James Hetfield deals unflinchingly with parental loss and the contradictions of faith in a mature and considered manner.

The confidence exuding from almost every track isn’t due to a clichéd, puffed-up HM swagger but a result of literate and articulate artists breaking free of generic expectation.