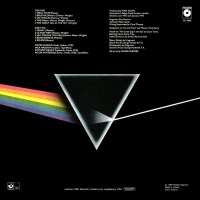 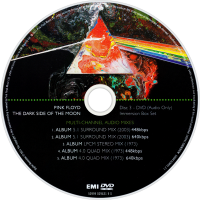 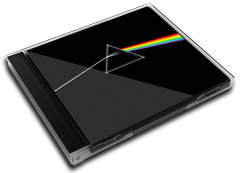 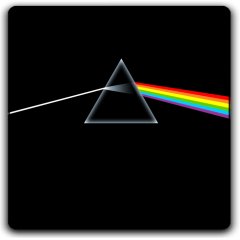 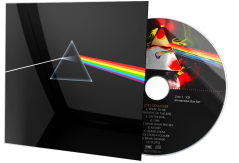 The Dark Side of the Moon is the eighth studio album by English progressive rock band Pink Floyd, released in March 1973. It built on ideas explored in the band's earlier recordings and live shows, but lacks the extended instrumental excursions that characterised their work following the departure in 1968 of founder member, principal composer and lyricist, Syd Barrett. The Dark Side of the Moon's themes include conflict, greed, the passage of time and mental illness, the latter partly inspired by Barrett's deteriorating mental state.

The suite was developed during live performances and was premiered several months before studio recording began. The new material was recorded in two sessions in 1972 and 1973 at Abbey Road Studios in London. The group used some of the most advanced recording techniques of the time, including multitrack recording and tape loops. Analogue synthesisers were given prominence in several tracks, and a series of recorded interviews with the band's road crew and others provided the philosophical quotations used throughout. Engineer Alan Parsons was directly responsible for some of the most notable sonic aspects of the album, and the recruitment of non-lexical performer Clare Torry. The album's iconic sleeve features a prism that represents the band's stage lighting, the record's lyrical themes, and keyboardist Richard Wright's request for a "simple and bold" design.

The Dark Side of the Moon was an immediate success, topping the Billboard Top LPs & Tapes chart for one week. It subsequently remained in the charts for 741 weeks from 1973 to 1988. With an estimated 50 million copies sold, it is Pink Floyd's most commercially successful album and one of the best-selling albums worldwide. It has twice been remastered and re-released, and has been covered in its entirety by several other acts. It spawned two singles, "Money" and "Time". In addition to its commercial success, The Dark Side of the Moon is one of Pink Floyd's most popular albums among fans and critics, and is frequently ranked as one of the greatest rock albums of all time.

Album Review
The official site for the umpteenth re-release of this old chestnut presents you with a daunting array of statistics that, if you're under the age of 30, will probably seem like the ravings of (appropriately enough) a lunatic. For if, by some freak circumstance (lost in Pacific jungle for thirty years/coma/just plain don't like lousy guitar bands etc.), you hold this CD in your hands for the first time, listen up: Dark Side Of The Moon spent an incredible ELEVEN CONSECUTIVE YEARS in the top 100 and has notched up a total of FOURTEEN YEARS lodged in the same place. That's a lot of Lear jets and football teams. But what new can be said?
Well, it now comes with an extra layer of new enhanced 5.1 surroundsound thingummy with (naturally) Dobly [sic]. And it's got a lovely new stained glass effect cover courtesy of Storm Thorgerson and his hilariously named Hipgnosis cohorts. And the music?
Contextually speaking this was the Floyd's saving grace. By 1972 they'd firmly claimed the avant garde (read: musically unadventurous but prone to hitting large gongs and setting fire to stuff onstage) art rock mainstream as their own playground. Yet these middle-class boys still craved, like, bread, man. After a prolonged period of fumbling soundtracks for European arthouse movies they'd finally emerged from under the shadow of founder/visionary/lost-marble icon, Syd Barrett with a coherently beautiful album, Meddle. Roger Waters had some big ideas about madness, life, death and all that deep stuff. EMI had a rather splendid studio with some top-notch engineers. Six months later...voila!
What made this concoction so popular at the time was a series of coincidences. The western world was now fully stereoed-up; the band hooked up with an immaculate engineer by the name of Alan Parsons (yes, that one with the project) and last, but not least, the band bothered to write some really fine songs. This was a long way from the half-baked nonsense that had plagued Ummagumma or Atom Heart Mother. Gilmour's guitar was now exquisitely tasteful (the heart still breaks over that little phrase about 36 seconds into ''Breathe'') and zen-like in what he could leave out (check the most underrated track ''Any Colour You Like''). The sound effects are as hackneyed as a 70s stereo demonstration record (that this album effectively replaced in most hi-fi stores at the time), yet the overall flow of the album still satisfies as it merges existential ballads (''Time'', ''Us And Them'') with cynical rockers (''Money'') and arena-impressing freak outs (''The Great Gig In The Sky'').
Too much scrutiny reveals a rhythm section that's laughably leaden, song structures that employ the same descending runs that appear on every Floyd album since Meddle (cf: ''Echoes'') and lyrics that embarrass with their sixth-form triteness. Yet how many writers will be saying the same of Radiohead's cosy attacks on globalisation and 21st century ennui on OK Computer (which owes such a huge amount to this album) in thirty years time? Ultimately it matters little. DSOTM is still a lovely record made brittle by overuse. One almost wishes that instead of spicing it up one more time, EMI had deleted it for a while to give us all room to breathe again...