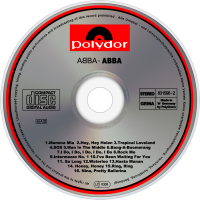 ABBA is the eponymously-titled third studio album by the Swedish pop group ABBA. It was originally released on 21 April 1975 through Polar Music.
Following the Eurovision success of "Waterloo", ABBA saw the band gaining worldwide recognition. "I Do, I Do, I Do, I Do, I Do" topped the charts in Australia, as did "Mamma Mia" shortly after. "SOS" and "Mamma Mia" became hits in both the United States and the United Kingdom, and two of its most famous songs. The album saw ABBA dabble into reggae with "Tropical Loveland" and includes a grand pseudo-classical keyboard instrumental in the traditions of Keith Emerson and Rick Wakeman with "Intermezzo No. 1" (originally entitled "Mama").
ABBA was first released on CD in Japan in 1986, with an alternative mix of "Man in the Middle" not found on any subsequent CD pressing. " ABBA was then released on CD in West Germany in 1987 (later released internationally), with five bonus tracks of songs from Waterloo and Ring Ring, which had not been released on CD at that time. ABBA was released on CD in Sweden in 1988 featuring the original 11 tracks only. The album has been reissued in digitally remastered form three times; first in 1997, then in 2001 and again in 2005 as part of The Complete Studio Recordings box set.