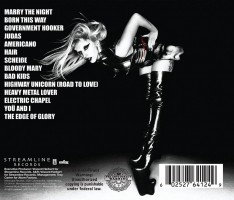 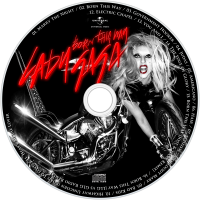 Album Review
Lady Gaga is the greatest thing that Planet Pop in 2011 could ever want. She’s a wise-beyond-her-years phenomenon who’s taken everything that has gone before and cast it into press-stopping new shapes ”“ the fright wig on top, merely a bonus. She’s so far above her chart contemporaries that she’s created her own orbit, around her own world. You’re all welcome here, whoever you are. What you take from it is your own business.
It’s probably best to ignore the questionable cover imagery of her third album (or second, depending on your definition of what The Fame Monster was) and focus on the actual music. What’s delivered is a high-octane blend of nods to cheesy Euro-rave (hints of Sash!, Human Resource and Rozalla) and the rock of Springsteen, Judas Priest and Queen. Add a smidgeon of electroclash (Chicks on Speed, Peaches) and giant choruses comparable to ABBA and Ace of Base, and it’s clear the average ”“ if the idea of ‘average’ exists in her world ”“ Gaga tune is designed solely to hook into your brain.
Opener Marry the Night is as perfect as a straightforward fist-pumping entry into a colossus can be. Does the title-track really sound like Madonna’s Express Yourself? Not to these ears ”“ and Gaga would never be so stupid as to allow blatant thievery to surface. The attempt to crowbar a song into what was built to be an anthem may put some off ”“ anthems follow their own destinies to such a deified status ”“ but it’s still an undeniably huge tune. If it speaks to a Middle America teen covering their bruises with foundation, then that’s a good thing. The following Government Hooker’s spooky opera entrance gives way to a Casiotone throb, Gaga throwing in references to JFK.
Americano delves into immigration over a futuristic musical theatre stomp, while Hair is an empowering freeway rocker about self expression. ScheiÃŸe is a monster tune begging for a sex dungeon-themed video event. The pace drops a bit for YoÃ¼ & I, a lighters-aloft moment which recalls Def Leppard. Not the most likely of stylistic inspirations, perhaps, but she makes the song work magnificently.
Gaga could have filled this album with guest slots from hip names and phoned-in cameos from rent-a-rapper types. But with the exception of Brian May axing all over YoÃ¼ & I, and the E Street Band’s Clarence Clemons honking over The Edge of Glory, there’s none of that. Born This Way is pretty much pure Gaga.
But this is not quite the revolution, and certainly not the greatest album ever made. It’s a storming collection of high-concept pop brilliance designed to soundtrack every preposterously tremendous Gaga moment for the next 18 months. If there’s a gripe to be had, it’s regarding the length: at an hour long, Born This Way initially feels more like an assault than an event, and it could easily lose a couple of tracks. However, if she is planning on releasing nine singles from it, then nobody can come away feeling ripped off.
Sometime in the future the frenetic, breathless giddiness will let up, and Gaga will ”“ after a holiday, hopefully ”“ breathe out and unleash her jazz odyssey. But until that happens, please enjoy someone actually putting a bit of effort and imagination back into pop, and keep the sneering and lazy comparisons in check. Not that they can take anything away from what is, simply, a marvellous record.