"Confetti" is a song by British girl group Little Mix from their sixth studio album of the same name. It was written by MNEK, Kamille, Maegan Cottone and TMS, and was produced by the latter. The song was first released through RCA UK on 4 November 2020, as the third promotional single of the album, and later a new version of "Confetti", featuring American rapper Saweetie, was released on 30 April 2021, as the fourth single from the album and the first as a trio, following the departure of Jesy Nelson, who left the group in December 2020 although her vocals were included on the album version. A music video was released alongside the song. The new version will also be included on the Record Store Day vinyl editions of the album, set to be released on 12 June.

Music video
A music video for "Confetti", directed by Samuel Douek, was released alongside the new version of the song on 30 April 2021. The video is set in a nightclub and shows the members of Little Mix having a showdown with themselves as male doppelgängers. Saweetie appears in the video, delivering her verse from a street outside while wearing leopard print. The video features cameos from A'Whora, Tayce and Bimini Bon-Boulash, three drag queens from RuPaul's Drag Race UK. 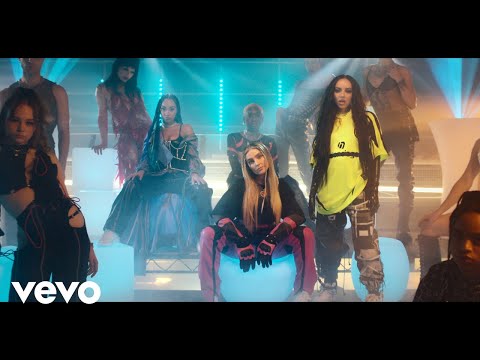