"Lindo Pero Bruto" (English: "Cute But Dumb") is a song by Mexican singer Thalía and Argentine singer Lali, from Thalía's fourteenth studio album, Valiente (2018). Written and produced by Andrés Castro, Edgar Barrera, DalePlay, Oscarcito and Patrick Romantik, it was released by Sony Music Latin as the album's fourth single on January 25, 2019.
Directed by Daniel Duran, the music video made its official premiere on American television show ¡Despierta América! on the morning of January 29, 2019. In the "candy-colored" music video for "Lindo Pero Bruto", both singers give life to a Barbie-inspired world filled with many neon colors, sweet treats, and dolls. Thalía and Lali play two female thinkers who are in a laboratory creating a futuristic machine to build a male prototype — in other words, the perfect man. However, they are the ones who become dolls. Described as "colorful, light-hearted and fun," the music video was inspired by the 1985 film Weird Science.
Thalía and Lali celebrated the success of the music video on YouTube through a Facebook live stream, which debuted at no. 2 on the January issue of the Billboard Top Facebook Live Videos Chart with 368 thousand views. It was also the most commented live stream of the month, with 14 thousand comments.[ 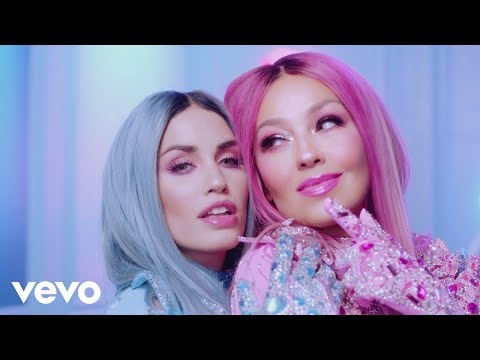