"I'm the One" is a song written and recorded by American musician DJ Khaled featuring Canadian singer Justin Bieber and American rappers Quavo, Chance the Rapper, and Lil Wayne. The song was released on April 28, 2017 by We the Best and Epic Records as the second single from Khaled's tenth studio album Grateful.

Background
DJ Khaled initially marketed the song in February 2017 by posting photos of the music video on his Instagram account. He announced the song's release date, title, and cover art on April 24, 2017. According to DJ Khaled, Quavo completed his verse for the song in five minutes after listening to the instrumentals.

Chart performance
"I'm the One" debuted atop the Billboard Hot 100, becoming the first number-one single on the chart for DJ Khaled, Chance the Rapper, and Quavo (as a solo performer apart from Migos). It became the first hip hop song to do so since "Not Afraid" by Eminem in 2010. It became Bieber's fourth chart-topper, following the first three singles off Purpose. Lil Wayne topped the chart for the third time in his career, but for the first time since 2009. The song also entered the UK Singles Chart at number one, a first for DJ Khaled, Quavo, Lil Wayne, and Chance the Rapper; it was Bieber's fifth chart-topping song in the UK. It also entered at number one in Australia, Scotland, and Canada, and debuted in the top ten in countries including Germany, Ireland, and New Zealand.

Music video
The song's accompanying music video premiered on April 28, 2017 on Khaled's Vevo account on YouTube. Models Alexa Lawrence and Iryna Ivanova and Quavo's fellow Migos members, Offset and Takeoff, make cameo appearances in the video. As of April 2018, it has received over 1 billion views on YouTube. The video was filmed at the luxury mansion known as "La Villa Contenta" located at 26880 Pacific Coast Highway, in Malibu, CA. The place was erroneously reported to be Khaled's own. Eif Rivera, named "Hip-Hop's Favorite Music Video Director" by XXL, directed the video. 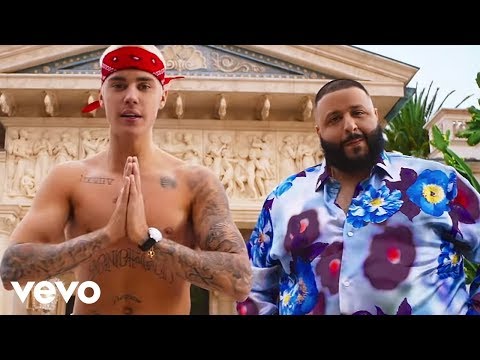