Track Description
"True Love" is a song written by British alternative rock band Coldplay. The song was originally recorded for the band's sixth studio album Ghost Stories, where it appears as the fourth track. It was released by Parlophone as the third single from Ghost Stories on 14 August 2014. The song was written by Guy Berryman, Jonny Buckland, Will Champion and Chris Martin, with production being done by Coldplay, Paul Epworth, Daniel Green and Rik Simpson, while American record producer Timbaland provided additional drums.

The song's main instrumentation consists in heavy rhythms, dancing synths and wallowing strings. It also features a guitar solo. Lyrically, "True Love" talks about heartache and how the protagonist can't bear the pain of losing his lover. The song's lyrics were adressed to be about Martin's divorce from his wife Gwyneth Paltrow, a recurrent theme on the whole album. Martin has claimed that "True Love" is the band's favorite track it has ever written.

The song received generally acclaim from most music critics, who commended the song's raw honesty and its lyrics, which were seen as haunting and painfully truthful. Commercially successful in Belgium and the Netherlands, "True Love" did not chart on the UK Singles Chart. The accompaning music video for the song was directed by Jonas Åkerlund, who also directed the "Magic" video. It was shot in Los Angeles and centres around a tale of two ballet-loving outsiders, played by Martin and Canadian actress Jessica Lucas.
After the success of their fifth studio album, Mylo Xyloto (2011), which sold more than 8 million copies worldwide and spawned the hit singles "Paradise" and "Princess of China", Coldplay planned to release a more stripped-down record. Frontman Chris Martin claimed that the album is about “life itself and all its glorious colorfulness", while critics noted that it was inspired in Martin's divorce from actress Gwyneth Paltrow, with "Ghost Stories" being deemed as a "breakup album". Martin elaborated: "Up to a certain point in my life I wasn't completely vulnerable and it caused some problems. If you don't let love in then you can't really give it back. So what 'Ghost Stories' means to me is like, you've got to open yourself up to love and if you really do, of course it will be painful at times, but then it will be great at some point."

On 4 August 2011, the band announced "True Love" as the album's third single, along with its artwork, which was created by artist Mila Fürstová. The song was officially released on 14 August 2014. Regarding the decision to release "True Love" as a single, Martin commented: "Sometimes we'll pick a single knowing that it doesn't really fit into how singles should sound or do sound. Our whole philosophy, especially recently, has been to follow our gut feeling. If we feel like this record needs to be a bit smaller and shouldn't tour it, then we follow it, and we worry about the consequences afterwards.
"True Love" was written by Guy Berryman, Jonny Buckland, Will Champion and Chris Martin, with production being handled by the band with Paul Epworth, Daniel Green and Rik Simpson. American record producer Timbaland provided additional drums, while Davide Rossi arranged strings. The song is written in the key of G major, with a moderate tempo of 120 beats per minute. Martin's vocal range spans from the low note of E4 to the high note of G6. Its instrumentation consist in heavy rhythms, dancing synths and wallowing strings. Chris DeVille of Stereogum noted that the song has "Timbaland show up to add 'Apologize'-style schmaltz" and "a mournful guitar solo."

Lyrically, "True Love" deals with themes of heartbreak, with Martin lashing out at his lover’s alleged lies, even as he strains to bring back the old feelings: "And I wish you would have let me know/ What’s really going on below/ I’ve lost you now, you’ve let me go/ But one last time/ Tell me you love me," he sings. In the chorus, the truth is too painful to bear, so the singer instructs his partner, "Just tell me you love me/If you don't, then lie/Oh, lie to me."
The song's music video was directed by Jonas Åkerlund, who also directed the "Magic" video. It was shot in Los Angeles and premiered on 22 August 2014. The video stars Chris Martin and Canadian actress Jessica Lucas. It centres around a tale of two ballet-loving outsiders and the message behind the video is about "in spite of the obstacles blocking our access, 'anything is possible'." According to Åkerlund, the video "came about in the same way as 'Magic' did. One thing I said early was that I wanted it to be very different in tone from 'Magic'. But related somehow because it has a story." 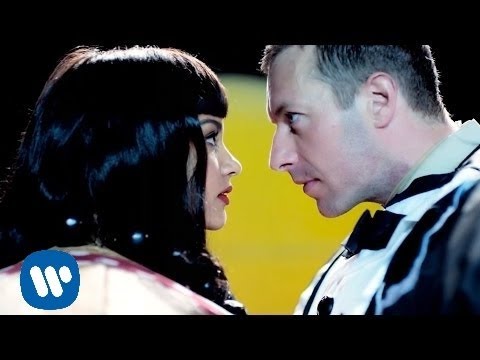