The Devil Went Down to Georgia

Track Description
"The Devil Went Down to Georgia" is a song written and performed by the Charlie Daniels Band and released on their 1979 album Million Mile Reflections.

The song is written in the key of D minor. Vassar Clements originally wrote the basic melody an octave lower, in a tune called "Lonesome Fiddle Blues". The Charlie Daniels Band moved it up an octave and put words to it. The song's verses are closer to being spoken rather than sung (i.e., recitation), and tell the story of a boy named Johnny, in a variant on the classic deal with the Devil. The performances of Satan and Johnny are played as instrumental bridges. The song was the band's biggest hit, reaching number three on the Billboard Hot 100. It is featured in the 1980 movie Urban Cowboy, whose choreographer, Patsy Swayze, claims that she set the song's tempo. "How fast can you dance it?" Daniels asked. "How fast can you play it?" Swayze replied.

The song is an uptempo bluegrass song about the Devil's failed attempt to "steal" a young man's soul through a fiddle-playing contest that involved enticing the young man's participation using a worldly prize. The song begins with a disappointed Devil arriving in Georgia, having stolen far fewer souls than expected, when he comes upon a fiddle-playing young man named Johnny. At that moment, Johnny happens to be playing his fiddle impressively "hot." Out of desperation, the Devil, who as it turns out also plays the fiddle, offers Johnny the wager which involves challenging the young man to a fiddle-playing contest. The Devil offers to give Johnny a golden fiddle if the young man plays better than he does; otherwise, the Devil will gain Johnny's soul. Although Johnny believes taking the Devil's bet might be a sin, he wagers his soul without fear, confidently boasting he is "the best that's ever been."

The Devil plays his fiddle first, to a contemporary, rock music theme with the backing of demon musicians. When the Devil's performance ends, Johnny compliments him and takes his own turn, making reference to four songs (see the section that follows). Two are traditional songs of Appalachia -- "Fire on the Mountain" and "Granny Does Your Dog Bite?" (the latter traditionally known as "Granny Will Your Dog Bite?"). The third is an unnamed square dance melody that includes the patter, "Chicken in the bread pan pickin' out dough." The last is a traditional American southern folk song "The House of the Rising Sun." The four songs are not performed but are only mentioned by reference. The Devil is impressed, admits defeat, and lays a golden fiddle at Johnny's feet. Johnny repeats his claim to be the best player ever and dares the Devil to a rematch in the future. 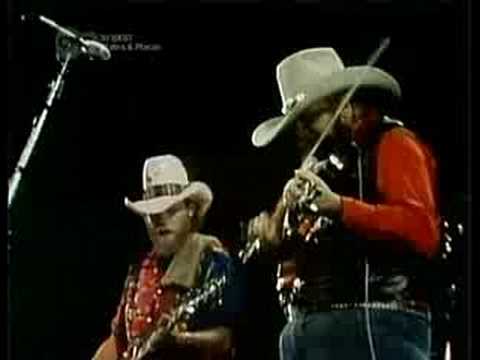