"Mein Herz brennt" (German for "My heart burns") is a single by German industrial metal band Rammstein. The song first appeared as the opening song to the band's third album Mutter in 2001, and was used as the opening track for concerts during that era. In 2011 it appeared on the band's first greatest hits compilation titled Made in Germany 1995-2011, being the only song on the album that at the time of release had not been released as a single or had a music video. It was announced on November 22, 2012 that the song would be released as a single to promote the upcoming video collection Videos 1995-2012. A piano version of the song was released as a single on 7 December 2012.
The song's lyrics involve a narrator describing the terrors of nightmares. The opening line of the song's intro and chorus ('"Nun, liebe Kinder, gebt fein Acht. Ich habe euch etwas mitgebracht" 'Now, dear children, pay attention. I have brought something for you') is taken from the 1950's German children's TV show Das Sandmännchen (The Little Sandman). Every night the show would come on and Das Sandmännchen would tell bedtime stories. This may entail the song's narrator being a darker version of the title character.
Two separate videos were composed for Mein Herz brennt, one for the original version and another for the piano cover. The music video for the piano version of the song premiered on 7 December 2012 via Vimeo. It was filmed in the main bathroom of Beelitz-Heilstätten, and was directed by Zoran Bihac. This is Bihac's fourth collaboration with the band, previously directing the videos for "Links 2-3-4", "Mein Teil" and "Rosenrot". Bihac describes the relationhip between the two videos as 'yin and yang', with the piano version being the latter.
The video features singer Till Lindemann wearing a black dress and fishnets, while also sporting black and white face paint. The entire bathroom is lite red, and in the centre is a 'T' shaped pool emitting light. The video consists of close-ups on Lindemann singing from behind the pool, until the second verse begins, where he begins to walk to the pool's foot. As the song closes, Lindemann walks into it and its light fades. The music video for the piano version of the song is the first to feature only Lindemann since Mutter.
The video for the original version was released on December 14th. In this video, the character of the Sandman is played by Melanie Gaydos. She first appears to a sleeping Richard Kruspe, triggering nightmares and sending him into a state of agony. Meanwhile, Till plays a being who terrorizes the complex of Beelitz-Heilstätten, which acts an orphanage. He kidnaps the orphans and places them in a cage located in the main bathroom, despite a female warden attempting to defend the children with a shotgun, as Till overpowers her. The warden appears in the video both young (Lilith Becker) and old (Anna von Rüden), while Till remains the same age, indicating Till's immortality and paranormal abilities. While guarding the orphans, Till takes a grotesque, insect-like form with an elongated head and fingers. The children are then used in various examinations and surgeries with the rest of the band playing the doctors. The female warden is also seen assisting them in her younger form. One of the surgeries sees a child's tears extracted through a syringe, which is then vaginally injected by the Sandman. The Sandman is also subject to examinations by the doctors, as Paul Landers is seen giving her a gynecological examination. She later walks in a dress shielding two small children, possibly indicating that the tears are involved in a form of In vitro fertilisation. While Till is away from the main bathroom, the children (portrayed by the rest of the band as disheveled adults) escape from the their cage and the orphanage. This causes Till to tear out and consume his own heart while the Heilstätten is engulfed in an inferno. The video ends with the liberated walking away from the building, while the chorus of the piano version plays in the background, signalling the video of the piano version as an afterword. 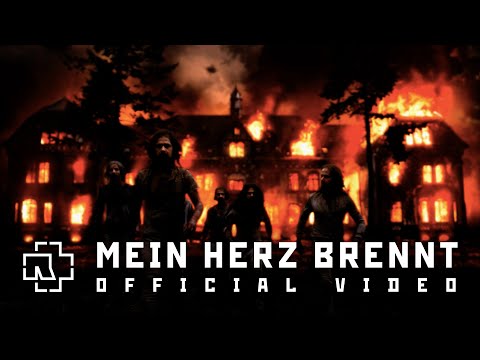