"Try to Follow Me" (Korean: 날 따라 해봐요; Nal Ddara Haebwayo) is a song by South Korean girl group 2NE1. It was originally released on February 9, 2010 to promote Samsung's "Corby CF" mobile phone. It later was released with the album "To Anyone" in September, 2010.
There was no video planned for 2NE1`s Try to Follow Me (Follow Me) but since the popularity of the song, a video was made. This video premiered March 11, 2010. It was filmed by Seo Hyun Seung (who previously shot their video for I Don't Care") sometime in February, the girls self-choreographed their dance parts.
It begins with, CL in a suit singing the introduction. After, it shows Cl and Dara sharing a motorcycle, then changes to, Minzy and Bom sharing another motorcycle. The verses shows, CL sealed onto a metal bathtub what is upside down with different cameras around her and in her second verse she is wearing a polka dot wig doing a dance. Bom shows her new edgy hair style and in her second verse, it shows her in her own high fashioned clothing. Minzy dances in front of a screen and in her second verse, it shows her laughing at her other self and dancing to the rhythm. Later on, Dara is seen with a gun-blaster as she fights against two Star Wars storm soldiers (later revealed to be CL and Minzy). When Dara shoots the camera with the blaster, it shows all the members in a jungle scene doing a dance. At the end, it shows all of the members dressed up like old fashioned-actresses playing with their feather boas. They do a dance going into each other and then the members change clothes into hip-hop clothing then the song ends (as the song ends it shows CL blowing bubbles and with the scene of the cameras, but normally this was cut out from Korean music channels and the TV show 2NE1 TV). 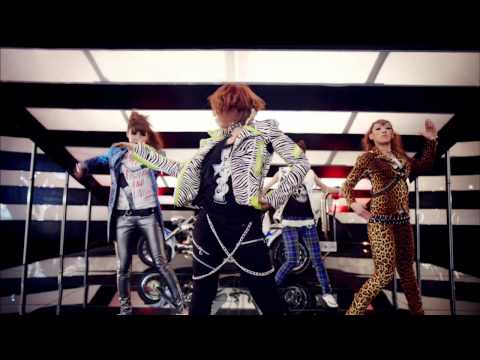