"Go Away" is a song by South Korean girl group 2NE1's album To Anyone. The song was produced and written by YG Entertainment producer Teddy Park. The song was released as the fifth single from the album. The music video was released on September 10, 2010. It was first performed on The Music Trend. The song hit number one in South Korea on the weekly charts and the monthly chart for September 2010.
The song was re-released in Japanese version in November 16, 2011 as the group's debut single from first studio album Collection, following their EP Nolza.
The music video was six minutes long and directed by Jae Eun-taek. It was filmed in August 2010 and was released on September 9, 2010
The music video opens with CL in a cafe with her boyfriend (Song Jae-Rim). CL's boyfriend breaks it off, telling her not to mess with him anymore or else he'd kill her, and then gets up to leave. CL wants him to stay and grabs his hand, but he lets go and leaves. A distressed CL puts her glasses on, bumps into a girl, then accidentally bangs into a door. Minzy is waiting for her outside in her car, then CL drives off. It begins to rain and CL throws what is presumably an engagement ring out of the car. In the chorus, CL is at the racetrack getting ready to race and sees her ex-boyfriend who is also wearing a race uniform with a new girl. The two race against each other but her ex-boyfriend wins, because she hesitated when he almost crashed into her. Intercut in the race are scenes of Dara and Bom. The next chorus shows Dara drinking with a devastated CL with Minzy outside the cafe standing in rain with an umbrella. Next all of the members are playing in a band in a garage with Bom playing the keyboard, Minzy on the drums, CL on the microphone, and Dara on the guitar. The next scene shows a drunk CL going to the house of her ex-boyfriend. CL knocks on the door and her ex-boyfriend tries to ignore her. CL gets angry and kicks the door. Her ex-boyfriend opens the door and drags her away where he slaps her and pushes her. CL falls to the ground and gets a bruise on her cheek. When he leaves, the other members come and help her get up. In the third chorus, CL has come to the racetrack again with an obvious bruise on her cheek and races against her ex-boyfriend again. At the last minute of the race, with tears on her face, CL bumps her ex-boyfriend's car and they both push against each other. CL's black car flies into the air then bumps into her ex-boyfriend's car again. The cars explode and start a fire. In the last scene, CL is re-covered and standing with the other members, dressed in black, looking at the car. They all turn and comfort CL, smiling as they walk away. 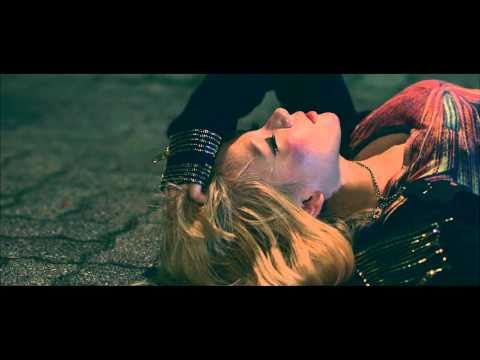