Welcome to the Machine

"Welcome to the Machine" is the second song on Pink Floyd's 1975 album Wish You Were Here. Written by bassist Roger Waters, it features heavily processed synthesizers and acoustic guitars, as well as a wide range of tape effects.

Gerald Scarfe created a music video, initially a backdrop film for when the band played the track on its 1977 In the Flesh tour. The fanciful video begins with what appears to be a giant mechanical Axolotl. The creature slowly lumbers across an apocalyptic cityscape. The scene then shifts to show emaciated rats leaping around corpse-laden steel girders. Gleaming industrial smokestacks soon fade in, and disturbingly crack and ooze blood. A view of a barren desert is then immediately shown. In the background a small tower grows out of this desert, but then transforms into a screaming monster, which stops to pant for a few seconds before viciously decapitating an unsuspecting man in the foreground. His head then very slowly decays to a damaged skull as the sun sets. Finally, an ocean of blood washes away this scene, and the waves turn into thousands of hands waving in rhythm to the music (much like people at a rock concert). All of the surrounding buildings are swept away; except one. Despite being pulled at by the bloody masses, it survives and, synchronising with the sound effects at the end of the track, flies up and away, high above the clouds to where it fits snugly into a hole inside a gargantuan floating ovoid structure. 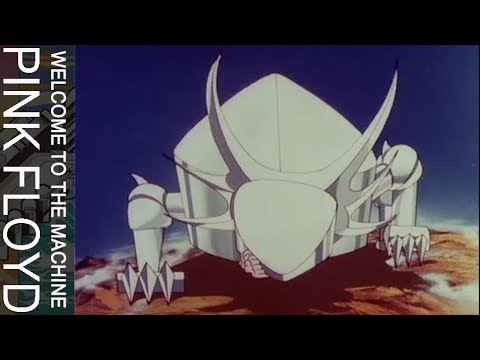