"Who's That Chick?" is a song by French DJ David Guetta, from the re-release of his fourth studio album One Love (2009), entitled One More Love (2010). The song features guest vocals by Rihanna. It was written by Kinda "Kee" Hamid, David Guetta, Giorgio Tuinfort and Frédéric Riesterer, with production helmed by Guetta, Tuinfort and Riesterer. It was released internationally on 22 November 2010, as a digital single. It was also released as a CD single and an Extended play (EP), the latter of which was released in the United States and contained remixes of the song.

Guetta was asked to produce songs for Rihanna's fifth studio album, Loud (2010). After he brainstormed ideas, Guetta conceptualized "Who's That Chick?" and played the demo recording to Rihanna backstage at one of her Last Girl on Earth Tour concerts. In an interview with MTV News, the DJ revealed that he thought the singer did not like the song on first impressions, but was honored when she agreed to record it. It was confirmed at a later date by Rihanna that the song would not appear on Loud's final tracklist, and that it would instead be included on the re-release of Guetta's One Love, which resulted in Rihanna appearing as a featured artist. "Who's That Chick?" is a dance-pop song and instrumentation consists of synthesizers.

"Who's That Chick?" received positive reviews from music critics, the majority of whom praised the collaboration between Guetta and Rihanna as well as its composition. It was described as one of the more interesting songs to be released in 2010, due to how the song was connection to multiple projects, including a promotional campaign with Doritos and both artist's albums. The song achieved moderate chart success; it peaked at number one on the Wallonia singles chart in Belgium, Slovakia, the UK Dance Chart and the US Hot Dance Club Songs chart. It attained top five positions on the singles charts in Austria, Finland, France, Ireland, Norway, Spain and Switzerland. It was less successful on the US Billboard Hot 100 chart, where it peaked at number 51. Two accompanying music video's were directed by Jonas Åkerlund. A bright and colorful daytime version was shot and used to promote the Doritos campaign, whilst a more dark and sinister nighttime version was shot as the song's official music video. 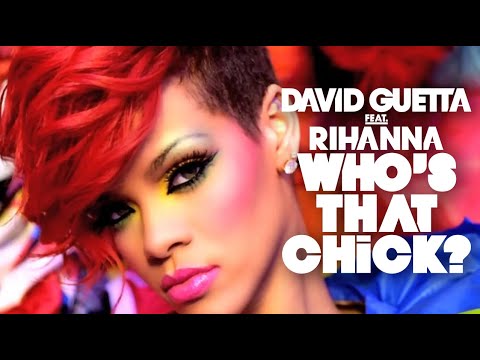