"Who You Are" is a song by English singer-songwriter Jessie J, released as the sixth overall single from her debut studio album of the same name. The song was written by Cornish, Toby Gad and Shelly Peiken, while the production was handled by Gad. The single was released via digital download on 13 November 2011. Musically, 'Who You Are' is a mid-tempo pop rock ballad with R&B influences. The song's lyrics address the importance of staying true to one's identity. According to Cornish, she wrote the song after a three-month lonely trip. The song received very positive reviews from music critics, who complimented her strong vocals in the song and considered a highlight on the album.

The official music video was released on Jessie J's official YouTube and Vevo channels on 29 September 2011. The clip was inspired by the one for Sinéad O'Connor's "Nothing Compares 2 U." The video was directed by Emil Nava.

The video features Jessie J in front of the camera as if it was her mirror in a bedroom. She is wearing a grey top with a black sports bra underneath. An en suite is visible in the background. Various angles of her singing are used throughout, e.g. on the bath in the en suite, on the floor, on the bed, etc. A mirror can be seen above left of the bed. Jewellery at the end of the bed, and on a bed-side locker, amongst other places are shown. As Jessie J begins to sing the final bridge, water begins to drip in front of her face. As the water falls, she wipes a drop from under her eye, as if she was crying. The entire room begins to be rained on, and wind begins to blow. Jessie J is completely soaking wet. Lights on the wall, and the lamp on her locker begin to spark, and turn off. The wind moves the jewellery off the bed and locker, taking the lamp with it. The mirror on the wall shakes. The video ends as the rain dies down, while Jessie J remains looking in her mirror. 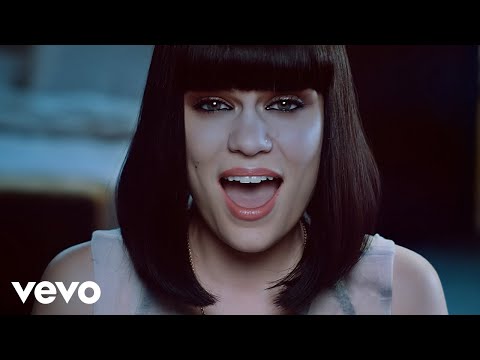