"Everything Has Changed" is a song by American recording artist Taylor Swift featuring British singer Ed Sheeran, taken from Swift's fourth studio album Red (2012). Written by Swift and Sheeran and produced by Butch Walker, the track was released as the sixth single from the album on July 16, 2013. "Everything Has Changed" is a guitar ballad combining folk and pop genres about "wanting to get to know a new lover better".

It was reported that British singer Ed Sheeran would appear as a guest artist on American recording artist Taylor Swift's then-upcoming album Red. On October 18, 2012, "Everything Has Changed" by Swift featuring Sheeran was leaked online. The song was written by Swift and Sheeran in Swift's backyard. "Everything Has Changed" is a guitar ballad, blending folk-pop genres. Written in the key of G-flat major, it has a moderate tempo of 84 beats per minute. The duo's vocal range spans from G♭3 to D♭5. Lyrically, the track talks about "wanting to get to know a new lover better". Swift further explained the song's theme, "Everything looks different to you because of this one person, because one new person came into your life. It’s really cool".

A music video for "Everything Has Changed" was released on Swift's VEVO channel on YouTube on June 6, 2013. It was directed by Philip Andelman and filmed in Los Angeles and San Antonio. The video begins with two children who initially appear to be Swift and Sheeran when they were much younger, meeting each other on a bus to elementary school. Young Taylor is played by Ava Ames. Throughout the video, the two children have their "youthful play" including painting their faces with crayons, pretending to be a princess and knight, and dancing with each other in the empty school gym. At the end, Swift and Sheeran appear and we realize that they are actually two different parents, arriving at the school to pick up their kids and take each of the children back to their respective homes. Jason Lipshutz from Billboard labelled the video as "impossibly adorable", while Ray Rahman from Entertainment Weekly compared the video's synopsis to Forrest Gump, but "much more gentle than that". To date, it has over 84 million views on YouTube. 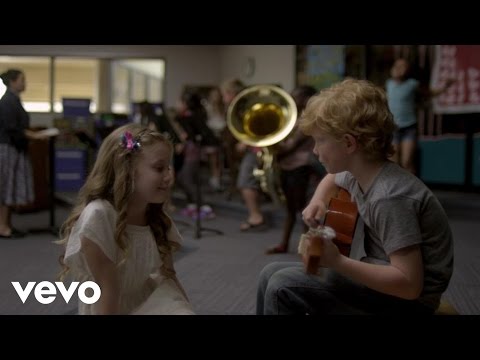