"Mutual Core" is a song recorded by Icelandic singer-songwriter Björk for her seventh studio album Biophilia (2011). It was written and produced by Björk herself, while programming and beats were made in collaboration with Matthew Herbert and English dubstep band 16bit. "Mutual Core" is an uptempo experimental song. Its music includes Pipe organ, electronica-tinged sounds and features the Choir Graduale Nobili, the choir featured on Biophilia. The song's lyrics are a metaphor for human relationships, compared to the structure of the Earth and Plate tectonics. The song was well received by contemporary music critics, who compared its sound to the work of The Chemical Brothers and praised its production and beats, moreover appreciating Björk's voice on the track.

As with all the songs on Biophilia, an app was made for the song, which features a video game in which the player have to move geological layers as an accordion to play chords. Though the song wasn't released as a single, a music video was produced, directed by Andrew Thomas Huang. Björk promoted the song by performing it throughout her Biophilia Tour. 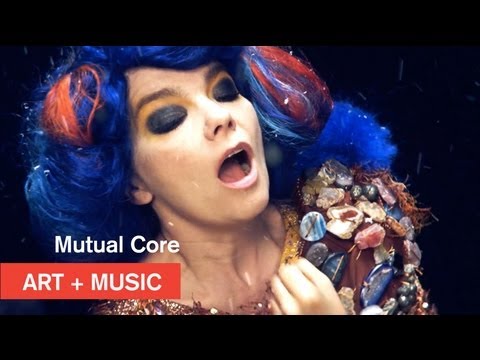