"Hung Up" is a song by American singer-songwriter Madonna. It was written and produced in collaboration with Stuart Price, and released as the first single from her tenth studio album, Confessions on a Dance Floor. Initially used in a number of television advertisements and serials, the song was released as the album's lead single on October 18, 2005. It has since also made an appearance on her 2009 greatest hits album, Celebration. It also became Madonna's first track to be released to iTunes Store for digital download.
"Hung Up" prominently features a sample of pop group ABBA's hit single "Gimme! Gimme! Gimme! (A Man After Midnight)", for which Madonna personally sought permission from ABBA songwriters Benny Andersson and Björn Ulvaeus. Musically the song is influenced by 1980s pop, with a chugging groove and chorus and a background element of a ticking clock that suggests the fear of wasting time. Lyrically the song is written as a traditional dance number about a strong, independent woman who has relationship troubles.
"Hung Up" received critical praise from reviewers, who believed that the track would restore the singer's popularity, which had diminished following the release of her 2003 album American Life. Critics suggested it was her best dance track to date and have compared it favorably to other Madonna tracks in the same genre. They also complimented the effective synchronization of the ABBA sample with the actual song. "Hung Up" became a worldwide commercial success, peaking atop the charts of 41 countries and earning a place in the Guinness Book of World Records. It was Madonna's 36th top 10 single on the Billboard Hot 100, tying her with Elvis Presley as the artist with most top ten hits. It also became the most successful dance song of the decade in the United States. "Hung Up" remains one of the best-selling singles of all time, with sales of over nine million copies worldwide.
The corresponding music video is a tribute to John Travolta, his movies and to dancing in general. Directed by Johan Renck, the clip starts with Madonna clad in a pink leotard dancing alone in a ballet studio and concludes at a gaming parlor where she dances with her backup troupe. Interspersed are scenes of people displaying their dancing skills in a variety of settings, including a Los Angeles residential neighborhood, a small restaurant and the London Underground. It also features the physical discipline Parkour. Madonna has performed the song in a number of live appearances, including as the finale number in 2006's Confessions Tour, a heavy metal-inspired arrangement in the 2008 Sticky & Sweet Tour and during the 2012 MDNA Tour where the singer performed slacklining. 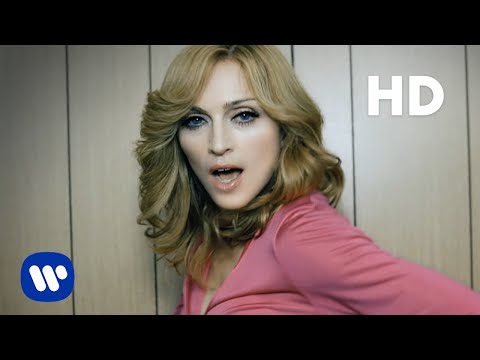