"Bad" is a song by American song writer and recording artist Michael Jackson. "Bad" was released by Epic Records in September 1987, as the second single from Jackson's seventh studio album of the same name. The song was written, composed, and co-produced by Jackson, and produced by Quincy Jones. Jackson stated that the song was influenced by a real life story he'd read about.
"Bad" was generally well received by contemporary music critics, with some critics noting that "Bad" helped Jackson's image become edgier during the Bad-era. The song peaked at number one on the Billboard Hot 100, and remained at the top position of the chart for two weeks, becoming Jackson's Bad album's second number one single, and Jackson's seventh number one entry on the chart. Internationally, the song was also commercially successful, charting within the top ten in eleven countries as well as charting within the top five in the United Kingdom, France, Italy, Norwegian, Switzerland and Swedish charts. The song peaked at number one on the Netherlands and European charts.
A music video for "Bad", directed by Martin Scorsese and co-starring one of the first appearances of yet-undiscovered Wesley Snipes, was released in late 1987. In the video, Jackson and a group of background dancers are shown doing dance routines throughout a subway station. The music video's choreographer stated that the plot and video of the background was strongly influenced by the "Cool" scene in West Side Story. The music video received one nomination at the Video Music Awards in 1988. "Bad" has been covered and parodied by multiple artists since its release as well as becoming a frequent song used during tributes to Jackson after his death in June 2009. 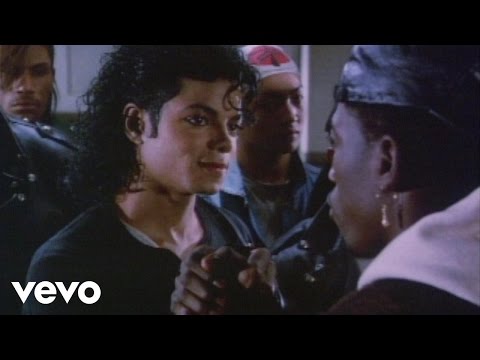