On January 28, 2008, Michael Hogan of Vanity Fair interviewed Ezra Koenig regarding the title of the song and its relevance to the song's meaning. Koenig said he first encountered the Oxford comma (a comma used before the conjunction at the end of a list) after learning of a Columbia University Facebook group called Students for the Preservation of the Oxford Comma. The idea for the song came several months later while Koenig was sitting at a piano in his parents' house. He began "writing the song and the first thing that came out was 'Who gives a fuck about an Oxford comma?'" He stated that the song "is more about not giving a fuck than about Oxford commas."

The song's lyrics contain multiple references to rapper Lil Jon (claiming that "he always tells the truth"). Lil Jon sent Vampire Weekend a case of crunk juice as thanks for the name check, and a friendship formed between Vampire Weekend and Lil Jon that would pan out into Lil Jon's cameo in the music video for "Giving Up the Gun". Also mentioned is the city of Dharamsala, the city in exile home of the 14th Dalai Lama ("the highest lama"), who is the current Dalai Lama.

The video, featuring Joe and directed by comedian Richard Ayoade, premiered June 20, 2008, on FNMTV. The concept behind the video was for it to be filmed in one long take — similar to the band's video for previous single "A-Punk" — with unified visual and musical aspects. The video drew heavily on impressions of the works of American filmmaker Wes Anderson. According to Koenig, "It's nice that now we're at a point where we have more resources and we can talk to the director." 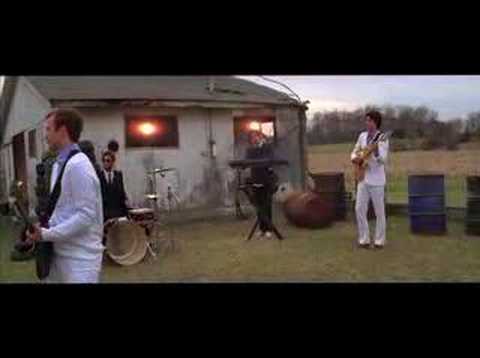