All Hope Is Gone

"Dead Memories" is a song by American metal band Slipknot. The song was released as the third single from their fourth album All Hope Is Gone. The track was released on December 1, 2008. The music video for the single was directed by P. R. Brown and Shawn Crahan. The video premiered on MTV2 on October 25, 2008. When performed live, Jim Root performs the solo. Unlike most Slipknot songs, there are no shouted vocals.
The music video for "Dead Memories" was directed by P. R. Brown. On September 30, 2008 the band's record label Roadrunner Records released a 15 second teaser video on YouTube which featured vocalist Corey Taylor in what appears to be a grave in torrential rain. The video premiered on MTV's Headbangers Ball on October 25, 2008 as part of the Headbangers Ball 20th anniversary special programming. The treatment for the music video was percussionist Shawn Crahan's idea, Crahan calls the music video a "short film" and admits that it was a "very" expensive video. Crahan's initial idea was to have several rooms, he introduced the idea to vocalist Corey Taylor who decided what each room would be. The music video starts off with Taylor walking from the Iowa State Capitol in downtown Des Moines into a rural area. Taylor walks through fields and begins to dig. He seemingly falls through the ground into a room below, now wearing a mask. The room is occupied by turntablist Sid Wilson, who is crawling on the walls and ceiling. Taylor opens the curtains, only to find the view obscured by earth, suggesting that the room is underground. Wilson tries to stop Taylor from leaving the room by grabbing his leg, however, Taylor is able to leave the room and enter a second room, which is occupied by drummer Joey Jordison, who is being pampered by 3 women. Taylor spectates the scene, but does not interact with anybody, and then leaves the room. Jordison spots his reflection in a mirror and turns as Taylor exits. He enters a third room that is occupied by sampler and keyboardist Craig Jones. When Taylor enters the room, the video is solarized and remains so throughout the scene, although Taylor's actions suggest that it is very dark. Taylor walks around Jones, who remains immobile throughout, and inspects his mask, "twanging" one of the nails driven into it. Jones lights up a flare, which temporarily blinds Taylor and then leaves the room and enters a fourth, which is occupied by then bassist Paul Gray.
This room is filled with mirrors, with some reflecting Taylor as he passes. One of them appears to reflect Gray instead of Taylor, who is noticeably unnerved and attempts to ascertain whether it is Gray or not by turning away from the mirror and back to it. He then waves and Gray uses the wrong hand, revealing that he is not a reflection. Gray advances, smashing the mirror, and his image appears in all the mirrors, visibly frightening Taylor. Backing away, Taylor falls backwards, and into another room, occupied by percussionist Shawn Crahan, who is dancing with several women. Taylor pushes his way into another room, which is occupied by guitarist Mick Thomson. The two stand off, and Taylor fails to push past Thomson several times. Thomson then advances towards Taylor, who bolts though the door he came through. He enters a seventh room which is occupied by guitarist James Root and several women, this time engaged in a pillow fight. Root spots Taylor but seems too caught up in the moment to interact with him. Taylor walks through the crowd into an eighth room, which is occupied by percussionist Chris Fehn, who is lighting candles. Taylor spectates and eventually blows a candle out while Fehn looks on. At the end of the video he emerges from the pit, where Taylor is also digging as shown at the beginning. On 5 November 2009, a 10 minute "short film" version of the video featuring narration by Corey Taylor was released. The video could be said to reflect tensions within the band, particularly the confrontation between Taylor and Gray. The "underground" setting might reflect the idea that when members are with the band they are cut off from the rest of the world, and the appearance of Taylor next to his unmasked self could highlight this as well. And also this song was the first song to debut their new masks the way they are all introduced one by one, and the title "Dead Memories" Would suggest that are remembering their old masks but they know that they have to replace them. 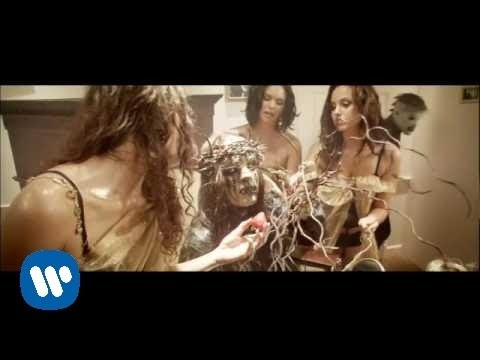