"I Miss You" is a song by Björk, the sixth and final single release from her 1995 album Post. It is amongst her least-well performing singles in the UK, but it hit #1 on the U.S. Billboard Hot Dance Club Play.

The lyrics describe Björk already knowing who her perfect lover will be, even though she hasn't yet met him. The remastered version as appears on the 2006 release Surrounded features a newly-recorded vocal take.

The track was performed during the 1995-96 Post Tour. In support of the release of Post the song was performed on UK TV show The White Room in 1995, and on the Spanish TV show Zona Franca in 1996 to promote the later single release. It was also notably performed on TFI Friday on 19 April 1996, with Howie Bernstein and the TFI Friday House Brass. This performance was later featured on the Post Live album. Having not been performed live in over a decade, the song would later be performed during the 2007-08 Volta Tour with the Icelandic "Wonderbrass" brass section, sometimes also with fellow Sugarcubes vocalist Einar Örn on trumpet.

The music video for "I Miss You" was animated and directed by John Kricfalusi of Spümcø, best known for the Ren & Stimpy cartoons, which Björk admired. The first edition of Telegraph, a fan magazine directed by Sjón, read: "To the horror of parents everywhere two of the most disturbed minds in show business come together to make what they promise will be the silliest, most demoralizing and, as some depraved souls will undoubtedly say, funniest music video ever!" The video has a surreal and humorous quality with some sexual imagery.

Another Kricfalusi character, George Liquor, makes a cameo in one scene. Also, Fred Flintstone makes a cameo in the scene of the bathroom. An edit was made of the video that covered Björk's breasts. The scene at the end of the music video showing Björk tearing an animated chicken in half was cut during showings on MTV. 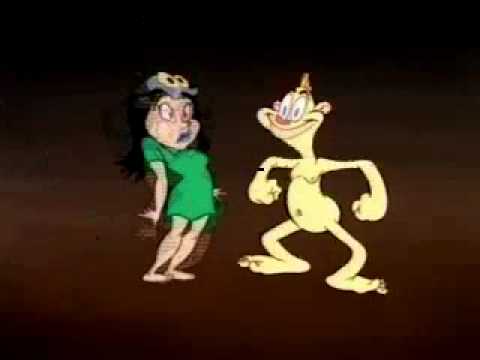