"Violently Happy" is a song by Icelandic singer and songwriter Björk, released as the fifth and final single from her album Debut in 1993. The song was written by Björk and Nellee Hooper, who helped her in writing and producing most of the album. The lyrics speak of Björk feeling a love so intense that it is actually dangerous, requesting that her lover return to "calm her down". Musically, it's an upbeat song which peaked at #13 in the UK and reached #3 on the US dance charts.

The song was released in March 1994 and received good reviews from music critics, which praised its musicality and its dance-pop appeal. The song received an accompanying music video which was shoot by Jean-Baptiste Mondino, in which Björk and many appearances dances frantically in a kind of Asylum while they're cutting out their hair or parts of dolls. Björk performed the song live a few TV appearances, including Top of the Pops.

"Violently Happy" received generally positive reviews from music critics. In particular, Simon Reynolds of The New York Times praised the song generally "The title of “Violently Happy” captures the Björk effect perfectly : a gush and rush of euphoria, a tidal wave of oceanic feeling. Over the song’s brisk house beats, Björk stammers as she struggles to express feelings of excitement so intense she seems on the brink of leaping out of her skin : “I’m driving my car too fast with ecstatic music on/ I’m daring people to jump off roofs with me.” In the end, she and Mr. Hooper resort to studio wizardry to gesture at inexpressible feelings, sampling one syllable and turning it into a stuttering vocal tic". The Daily Telegraph's journalist Emily Bearn noticed that "Violently Happy" finds her making guttural noises at the sea : "I tip-toe down to the shore/Stand by the ocean/Make it roar at me/And I roar back".

The song was defined "bittersweet" by Heather Phares of Allmusic, and "insanely addictive" by Sean McCarthy of The Daily Vault, which also deemed its title as "one of the best song titles of all time". Brantley Bardin of Details commented that "Songs like “Violently Happy” summed up a worldview that put all its faith in emotional abandon instead of logic. “Too much cleverness,” says Björk, is the worst disease in the world. It ruins everything. Give us a laugh—make us happy". 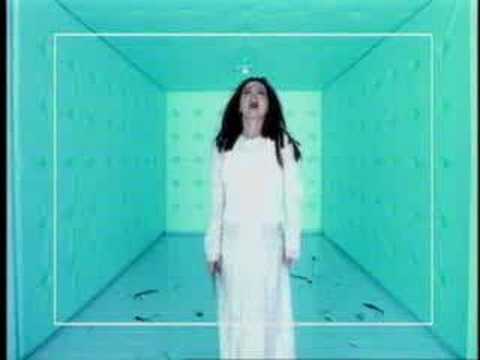