"Drunk" is a song by British singer-songwriter Ed Sheeran. It was released as the fourth single lifted from the debut studio album + on 17 February 2012. The song was written by Ed Sheeran and produced by Jake Gosling. The single entered the UK Singles Chart at number 63. The week after, it climbed to number 29. Later on, it climbed to number 9, making it his fourth top ten single.

On January 14, 2012, Ed Sheeran announced on Twitter that his single, "Drunk" would be released as the fourth single from his debut album + saying "So my next single is Drunk, I got 2 music videos coming for you..... :)". The official music video, released on 23 January 2012 features a cat who takes Ed out and gets him drunk to distract him from a break-up. The girl in the video, is the singer supporting him on his recent tour, Nina Nesbitt. This happens to be his first music video that he fully starred in. Another video was released several days before made by his cousin. The music video featured a mash up of clips from his UK tour.

A music video was released for the song on 20 January 2012 with Nina Nesbitt and currently has over 20 million views on YouTube. The video, written and directed by Saman Kesh, starts with Sheeran coming home and sitting down on the couch, depressed. As he opens a can of beer, he notices his cat talking to him. Together they drink beer and do various activities, and later they go to a pub. Sheeran and his cat are kicked out when a person takes a photo of Sheeran and his cat starts a fight with that person. They bring several women and cats home to party and Sheeran starts hallucinating from his intoxication. The video ends with Sheeran waking up on the same couch with his cat next to him and a can of beer on the table. Throughout the video, Sheeran continues to have flashbacks of a particular woman and looks depressed immediately after, implying that she is Sheeran's ex-girlfriend who recently broke up with him. 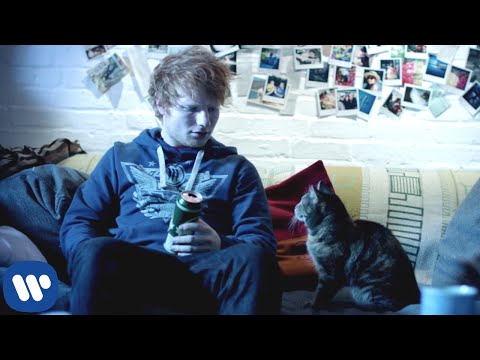