"Space Cowboy" is the international lead single taken from British funk/acid jazz band Jamiroquai's second studio album, The Return of the Space Cowboy. The single peaked at #17 on the UK Singles Chart, and was the band's first number one on the U.S. Dance Chart. Two very distinct versions of the song exist. One was recorded with Stuart Zender on bass, has a greater tempo, and uses a 'bass slap' technique during the chorus. This version is commonly known as the "Stoned Again Mix", even though it is the original version of the track. The second version, the version that appears on the album, is considerably different, with a lower tempo, and a completely dissimilar bassline. The bass on the album version was not played by Zender, but by an unknown artist only credited as "Mr. X" in the booklet. It was this song that earned Jason the "space cowboy" nickname in the press. The American version of the single contains a number remixes by David Morales. Most live versions of the song are as long as twelve minutes, adding additional verses, and instrumental parts. While the album version utilizes no wind instruments, some live versions, such as the ones from the Travelling Without Moving era, or the High Times: Singles 1992-2006 era, do. The version of the song played live is the "Stoned Again Mix". "Space Cowboy" is a frequently covered song, with two notable cover versions; one by Jazzamor, and one by the band Jacarandaa.
A music video was filmed for "Space Cowboy", using the "Stoned Again" Mix of the song. It was directed by Vaughan Arnell and Anthea Benton, and mainly featured Jay Kay dancing around a blue room with multiple versions of him and the other band members appearing and disappearing. Occasional breaks show the band members against a blacklight with marijuana-leaf motifs. The video makes use of motion control photography to allow a seemingly-continuous shot as the camera pans around the room. The American version of the video replaced the leaves with daisies, without Jay's consent. A video of the remix by David Morales also exists. 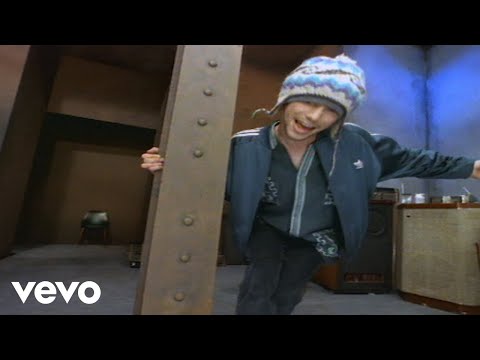