Track Description
"Californication" is the Red Hot Chili Peppers' fourth single and sixth track from their 1999 seventh studio album, Californication. Released as a single in 2000, the song reached number 69 on the Billboard Hot 100 in the US, number 16 on the UK Singles Chart, and hit number 1 on both the US Mainstream Rock Tracks for 2 weeks and US Modern Rock Tracks for 1 week.

The song is mainly about the dark side of Hollywood and the export of culture through the movie industry. The song begins "Psychic spies from China try to steal your mind's elation." Kiedis says in his book Scar Tissue that he got the inspiration for the line from hearing a woman on a New Zealand street ranting about "psychic spies in China". The track also makes references to topics such as pornography ("hardcore soft porn") and plastic surgery ("pay your surgeon very well to break the spell of aging") and even some pop culture references including Nirvana singer Kurt Cobain and David Bowie ("Cobain, can you hear the spheres singing songs off Station to Station?"), The Beach Boys ("They're just another Good Vibration"), Star Wars ("and Alderaan's not far away") and Star Trek ("Space may be the final frontier but it's made in a Hollywood basement"). The phrase "First born Unicorn" refers to Dorothy Stratten, whose life was covered in the book The Killing of the Unicorn.

Guitarist John Frusciante exclusively recorded this song and "Otherside" with a vintage Gretsch White Falcon hollow body electric guitar; he also played these songs live with the White Falcon until 2006 when he retired it for one of his vintage Fender Stratocasters.

It is notable for its sparse combination of guitar and bass notes in the main riff; Frusciante drew inspiration for the song "Carnage Visors" by The Cure.

In Kiedis's book, Scar Tissue, the author reveals that the band had enormous difficulty in putting the song together. Kiedis had written the lyrics, which he felt were some of the best he had ever written, but the band could not decide how the song should sound musically. As they struggled with the song it seemed like they would not be able to finish it in time to include it on the album, until one day Frusciante walked into the studio and exclaimed that he had "figured it out". He played the song as he visualised it, and it went from being a song that could have been an afterthought, to becoming one of the Red Hot Chili Peppers' greatest hits, similar to the way "Under the Bridge" was conceived.

The Red Hot Chili Peppers' Greatest Hits album uses a slightly different version of the song. Most notably, the first chorus is extended. The reason for this alternate version's appearance on the album is unknown. 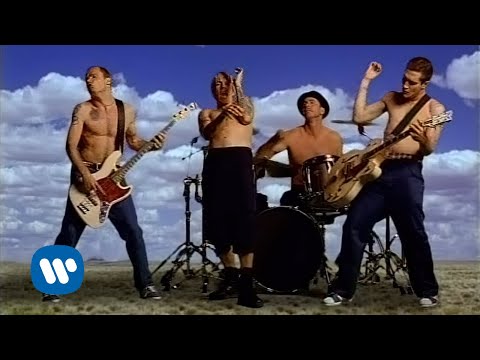