"Karma Police" is a song by English alternative rock band Radiohead from their 1997 third studio album OK Computer. The song's title and lyrics derive from an in-joke among the band, referring to the Hindu theory of cause and effect, known as karma.

"Karma Police" was released as the second single from OK Computer, and became a commercial success, charting at number eight on the UK Singles Chart and number fourteen on the US Hot Modern Rock Tracks. Critical reception to the single was also favourable.

In 2008 the song was featured on the Radiohead: The Best Of collection.

"Karma Police", like several other songs that would make up OK Computer, was debuted live in 1996, when the band briefly supported Alanis Morissette on tour. A live version of "Karma Police", performed with a Rhodes piano on the Late Show with David Letterman, is captured in the Radiohead documentary Meeting People Is Easy.

"Karma Police" is in a 4/4 time signature and played in standard tuning. The first half of the song is in the key of E minor, and would feature a Neapolitan chord (F). The second half (starting with the line "For a minute there") is in B minor. Acoustic guitar and piano are the most prominent instruments in the song, and the chord progression owes an audible debt to The Beatles song "Sexy Sadie".

The structure of the song is unconventional in that it has nothing resembling a typical chorus. Instead, the song progresses from the intro into a mid-tempo section which alternates between two verses. The first verse begins with the line "Karma police", and the other begins with the line "This is what you'll get". During the second section the drums drop out and an analog synthesizer imitating a choir is featured. After this section cycles through twice, the song switches into a second section which is based around the line "For a minute there, I lost myself". During this section of the song, Yorke's voice is put through an echo effect and a sliding melodic figure serves as a counterpoint to Yorke's vocals. In the outro, Ed O'Brien plays a few notes on his guitar, which are distorted by overloading an AMS rackmount digital delay unit and turning the delay rate knob down.

Radiohead members used to tell one another that they would call "the karma police" on them if they did something bad. The joke was incorporated into the lyrics and title of the song. Yorke explained that the song was about stress and "having people looking at you in that certain way, I can't handle it anymore". Thom Yorke explained the idea of the lyrics to The Independent in 2006, saying, "It's for someone who has to work for a large company. This is a song against bosses. Fuck the middle management!" Yorke and Jonny Greenwood emphasised in interviews that the song had a humorous bent; Yorke said, " not entirely serious, I hope people will realize that." The song includes the line "He buzzes like a fridge/He's like a detuned radio", a reference to the distracting, metaphorical background noise Yorke calls "fridge buzz". Yorke has said that the idea of fridge buzz is one of the primary themes of OK Computer. "Karma Police" also shares themes of insanity and dissatisfaction with capitalism.

The music video for the song was directed by Jonathan Glazer, previously responsible for Radiohead's "Street Spirit (Fade Out)" clip. The video premiered in August 1997 and featured Radiohead frontman Thom Yorke as well as Hungarian actor Lajos Kovács. Glazer won MTV's Director of the Year award in 1997 for his work on this, as well as Jamiroquai's "Virtual Insanity". Glazer however revealed in an interview that he considers this video to be a failed attempt. According to MTV.com, Glazer had pitched the concept of the "Karma Police" video months earlier to Marilyn Manson, who disliked it.

The video starts with the camera, an unseen driver, looking at the empty back seat of a 1976 Chrysler New Yorker at night. The 'driver' then faces the windscreen and begins driving. For 35 seconds, it shows nothing but a road through grass illuminated by headlights, with insects visible around the windscreen. A figure is then seen running from the car. In time for the chorus the view shifts back to the back seat, where Thom Yorke now sits, almost mumbling his lyrics. The view yet again moves to the figure, who is close to being mown down, as the view again switches to Yorke, now slouching drowsily against the back of the front seat, barely lipsyncing any longer. The camera swivels again and the figure appears again, close this time. For the first time another perspective reveals the outside of the car. The pursued figure sharpens and is revealed to be a large man with a frightened look. The car comes to a stop before him, then reverses slightly, as if for a 'run up', and this reveals it to be leaking fuel. The man realises the car has a petrol leak and puts his hands behind his back as if in resignation, then takes matches from his pocket, lights one, and throws it down. The perspective shifts to the car's interior. The car suddenly reverses, away from the man, a path of fire now blazes back towards the car. The car slowly catches fire, and the camera/driver finally turns frantically to the back seat and robotically swivels back and forth, only to find that Yorke is no longer there. 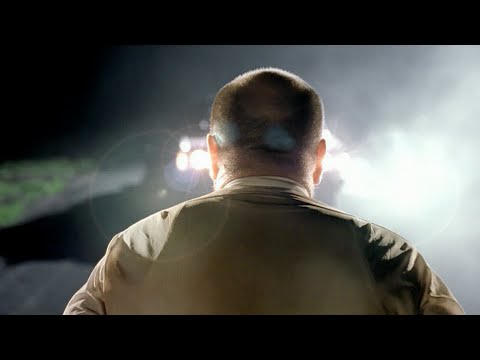