"Run This Town" is a song by American rapper Jay-Z. The song also features Barbadian recording artist Rihanna and American rapper Kanye West. It was written by the performing trio, with assistance from Ernest Wilson, Jeff Bhasker and Alatastas Athanas. Production of the track was made by West and Wilson (also known as "No I.D."). "Run This Town" was released as the second single from Jay-Z's eleventh studio album The Blueprint 3.

"Run This Town" received mixed reviews from music critics; some praised what each member of the trio brought to the track, whilst others thought that Kanye West and Rihanna out-performed Jay-Z. The song was a commercial success, reaching number two on the US Billboard Hot 100 and number one on the UK Singles Chart. It additionally made top ten chartings in ten other countries including in Australia, Norway, Sweden, and Switzerland.

The song's accompanying music video, directed by Anthony Mandler, depicts the trio in a post-apocalyptic environment, featuring scenes involving angry protesters surrounding them. "Run This Town" was performed by Jay-Z, West, and Rihanna on the series premiere of The Jay Leno Show in the United States. 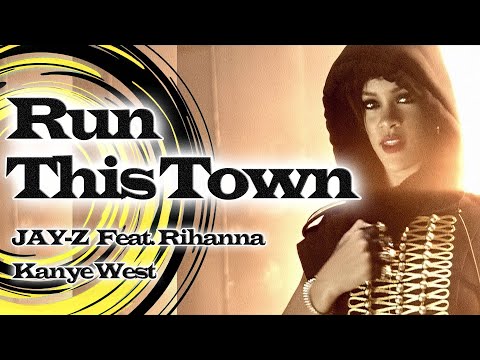