"I Gotta Feeling" is the second single from The Black Eyed Peas' fifth album The E.N.D., produced by the French DJ David Guetta. The song was released on May 21, 2009 and debuted at number two on the Canadian and Billboard Hot 100 on the week of June 27, 2009, behind the group's "Boom Boom Pow", making the group one of 11 artists who have occupied the top two positions of the Billboard Hot 100 at the same time. The song later reached number one on the US charts and 20 charts worldwide.

The song was nominated for Record of the Year at the 52nd Grammy Awards and won the Grammy for Best Pop Performance by a Duo or Group with Vocals. "I Gotta Feeling" was 5th on the Billboard Hot 100 Songs of the Decade. The song was also nominated as Song of the Year at the 2009 World Music Awards. In March 2011, it became the first song in digital history to sell over 7 million digital copies in the United States. As of June 2013, it has sold over 8.3 million downloads in this country. This also makes it the highest selling digital as well as non-charity single in the US ever.

"I Gotta Feeling" spent fourteen consecutive weeks atop the Billboard Hot 100, the longest-running number-one single of 2009. The song was the third most successful song of the decade in Australia, as announced on January 7, 2010. As of February 2010, "I Gotta Feeling" holds the record as the most downloaded song on iTunes of all time. Worldwide it has sold over 15 million units, becoming the best-selling digital single of all time.

The official final version was released on June 2 on Dipdive and on June 15 on iTunes. There is both a censored version and an explicit version of the music video and a live performance of the explicit video. The video starts with scenes in Hollywood Blvd. and then showing will.i.am combing his hair and Fergie putting on make-up while wearing lingerie. It also shows Taboo checking his messages on Dipdive and apl.de.ap checking his text messages. Then it cuts to the party as the first verse starts. In the uncensored version, there are some scenes featuring gay and lesbian content – Fergie dances suggestively and makes out with another woman, whilst two female partygoers are seen kissing at the two minute mark. Before these scenes, one of two men making out is shown. The video ends with a large sign with human-sized letters that reads "The E.N.D." The video is directed by Mikey Mee of Little Minx and features guest appearances by David Guetta, Kid Cudi, Katy Perry, Chantal Jones, members of the indie rock band Gossip, the designer duo Dean and Dan Caten of Dsquared2 and a few well-known personalities of the LGBT community, including Ongina of RuPaul's Drag Race fame. 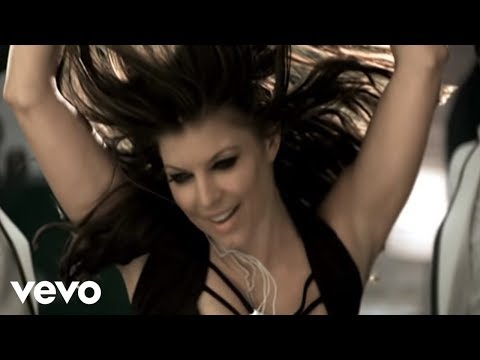