Any Man of Mine

"Any Man of Mine" is a song co-written and recorded by Canadian country music artist Shania Twain. It was released in April 1995 as the second single from her album The Woman in Me. The song was written by Robert John "Mutt" Lange and Twain. The song became Twain's first number one hit at country radio, as well her first crossover hit after it cracked the top 40 on the pop charts. It was released to radio in April 1995, and topped the charts for two weeks in July. "Any Man of Mine" was released to European markets but due to its country sound, it didn't make much of an impact. The song was later included in Twain's 2004 Greatest Hits package.

The music video for "Any Man of Mine" was shot in Santa Ynez, California and directed by John Derek and Charley Randazzo. It was filmed on February 23, 1995. According to Twain in an interview, she stated that it was originally going to be released in March 1995, but was pushed back to April 1995. She announced that the video "is coming", she also explained that is not yet released because it is still being edited and that she wants it to be perfect. On April 24, 1995, a preview of the video was available to be viewed on Twain's official website. On April 26, 1995, the full video was released onto her website and onto the CMT. The video showcases Twain's famed midriff, while she dances around in jeans and a jean-vest. The country theme of the video is prominent, filmed at a ranch, with Twain being around a horse, and driving a truck pulling a horse trailer. "Any Man of Mine" won the Canadian Country Music Award for Video of the Year, AOL's Online Music Award for Hottest Country Video and CMT Europe's Video of the Year. Two videos were made, one with the Video Version, which extends the ending of the Album Version very slightly, and one with the Alternate Mix, which removes the slide guitar present in the other version. It is available on Twain's DVD The Platinum Collection. 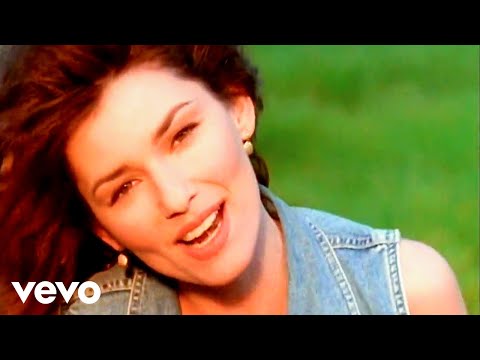