Track Description
"Dance Tonight" is a song by Paul McCartney, the opening track to his 2007 album Memory Almost Full. The song was released as a download single in the United Kingdom on 18 June 2007, McCartney's 65th birthday. A week later, the song debuted at number 34 in the UK Singles Chart. The UK single was also issued as a picture disc that came in a plastic sleeve with a cardboard insert. On 1 July, the song peaked at number 26 in the UK charts. This is the final single of McCartney's to date to have charted in the UK top 75. The song was also nominated for Best Male Pop Vocal Performance at the 2008 Grammy Awards.

In the United States, it was released as the second single from the album. The song also debuted on the Billboard Hot 100 at number 69. It marked McCartney's final appearance in the Hot 100 until 2015.

The song was recently used on PBS network Thirteen, advertising its May 2013 lineup.

A music video for the song was directed by Michel Gondry, features Natalie Portman and Mackenzie Crook and is choreographed by Blanca Li. It begins with a postman (Crook) delivering a left-handed mandolin to McCartney. The postman invites himself in for a cup of tea, then he opens the package revealing the mandolin. As soon as McCartney starts playing the song, a ghost (Portman) emerges from the package and starts dancing. More extravagantly dressed ghosts emerge from other places (an open drawer, the fireplace, the washing machine etc.) and dance around McCartney while he plays and sings in various rooms. The ghosts also play tricks on the postman, floating around him and making him levitate, which scares him away from the house. During the song's second-to-last verse, Portman steals McCartney's mandolin, which reverses the situation, making her come alive while turning McCartney into a ghost. He chases her and the other ghosts until she slips back into the package, dragging McCartney in with her as well. As the song ends, the ghosts' world (inside the package) is revealed to be a wild party, where all the ghosts, now fully alive, have lots of fun (the postman is there as well), while McCartney plays bass, accompanied by a drummer (Gondry). The final shot of the video is of the postman's van, left empty on the road. 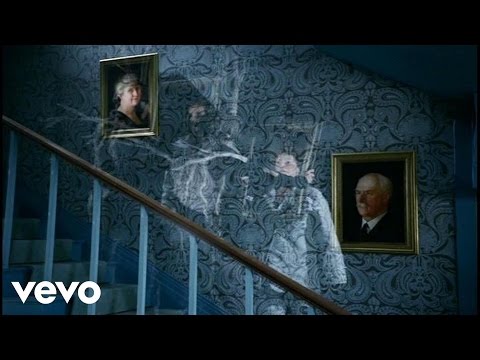