"Wish You Were Here" is the title track on Pink Floyd's 1975 album Wish You Were Here. Like most of the album, it refers to former Pink Floyd member Syd Barrett and his breakdown. David Gilmour and Roger Waters collaborated to write the music, and Gilmour sang the lead vocal. On June 14, 2013, the song was released as an unofficial promotional single on Spotify, and when fans streamed it one million times, which happened after only four days, the rest of the band's catalogue was released.

In the original album version, the song segues from "Have a Cigar" as if a radio had been tuned away from one station, through several others (including a radio play and one playing the opening of the finale movement of Tchaikovsky's Fourth Symphony), and finally to a new station where "Wish You Were Here" is beginning. The radio was recorded from Gilmour's car radio. He performed the intro on a twelve-string guitar, processed to sound like it was playing through an AM radio, and then overdubbed a fuller-sounding acoustic guitar solo. This passage was mixed to sound as though a guitarist were listening to the radio and playing along. As the acoustic part becomes more complex, the 'radio broadcast' fades away and Gilmour's voice enters, becoming joined by the full band.

The intro riff is repeated several times, before Gilmour plays further solos with scat singing accompaniment. A third verse follows, featuring an increasingly expressive vocal from Gilmour and audible backing vocals. At the end of the recorded song, the final solo crossfades with wind sound effects, and finally segues into the second section of the multi-part suite "Shine On You Crazy Diamond".

'Wish You Were Here' was recorded at Abbey Road Studios, as part of the sessions for the entire album.

A noted part of the song was a planned contribution by Stéphane Grappelli. A jazz violinist popular at the time and well known for his collaborations with Yehudi Menuhin, both violinists were recording in a downstairs studio at Abbey Road at the time. Gilmour had suggested that there be a little "country fiddle" at the end of the song and invited them to participate. Grappelli duly obliged (Menuhin declined) on arranging a session fee of £300. Ultimately during mixing it was decided to almost remove his contribution, although it can just be heard around 5:21. According to Waters it was decided that it would be insulting to credit Grappelli in the sleeve notes for something so inaudible, although he did receive the agreed-upon fee.

As part of the Why Pink Floyd...? campaign, the Experience and Immersion versions of the Wish You Were Here album include an alternate version of the song where Grappelli's part is heard in the instrumental break after the second verse and throughout the third verse before a considerably extended outro. Other less obvious differences are audible, for example at the section leading into the second verse.

The master tape of the original recording includes an entire performance of pedal steel guitar and electric guitar solos, played by David Gilmour, that were not used in the final mix. 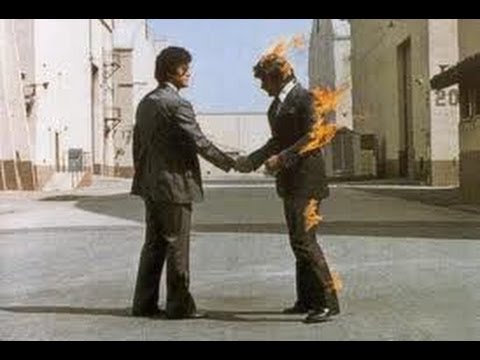