Heavy Is the Head 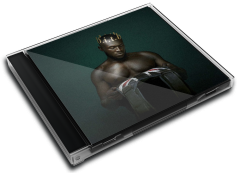 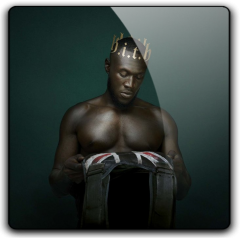 Heavy Is the Head (abbreviated to h.i.t.h on the album cover) is the second studio album by British rapper Stormzy. It was released on 13 December 2019 through #Merky Records and Atlantic Records UK. The album features collaborations with Aitch, Burna Boy, Ed Sheeran, Headie One, H.E.R., and Yebba.

Heavy Is the Head was supported by the singles "Vossi Bop", "Crown", "Wiley Flow" and "Own It". "Vossi Bop" was Stormzy's first number-one hit on the UK Singles Chart, whilst "Crown" and "Own It" reached the top 10 on the chart. Heavy Is the Head received positive reviews from critics upon release, with praise being directed at its emotional depth and diversity of genres in comparison to Stormzy's debut album Gang Signs & Prayer. It debuted at number two on the UK Albums Chart, behind Rod Stewart's You're in My Heart: Rod Stewart with the Royal Philharmonic Orchestra and ahead of Harry Styles' Fine Line.

Album Review
When Banksy put the vest on me,” says Stormzy, a matter of minutes in to his second album, “it felt like God was testing me.” It’s the second time he’s mentioned his headlining appearance at this year’s Glastonbury in as many tracks, but who can blame him? A risky but ultimately triumphant, even epochal performance, it served to underline Stormzy’s unique position among his UK rap peers.

Britain is currently teeming with fantastic MCs, but Stormzy is the only one your dad knows the name of. In the two years since the release of his debut album, Gang Signs & Prayer, he has become a boundary-crossing figure in British cultural life. Not only is he able to take a single as uncommercial as the dark, minimal Vossi Bop to No 1, but he has translated his commercial success into roles as a philanthropist, publisher and activist with enough clout to have his opinions raised by those interviewing the prime minister. He has attracted praise not just from the usual sources but from the vice-chancellor of Cambridge University and the Archbishop of Canterbury, who has said he prepares for officiating major events by listening to Stormzy’s 2017 single Blinded By Your Grace: neither are figures noted for their in-depth knowledge of freestyles, diss tracks and Lord of the Mics clashes.

Of course, an MC’s success isn’t dependent on establishment approval. Nevertheless, no other figure in UK rap history has achieved anything like this. Understandably, Heavy Is the Head begins in triumphal style: the brassy fanfare of Big Michael heralds lyrics that enumerate Stormzy’s achievements and tell his rivals where to get off in characteristic style (“Suck your mum”). But the celebratory mood lasts only two tracks, before the album’s emotional temperature plummets.

It’s perhaps a stretch to describe Heavy Is the Head as grime’s answer to In Utero – Kurt Cobain never took time out from howling his distress at Nirvana’s newfound celebrity to inform his audience that, on the upside, he just bought an £140,000 Richard Mille watch. But the picture Stormzy paints of stardom is a pretty bleak one; an unremitting parade of jealous friends, unwarranted criticism, ever-increasing numbers of enemies and damage to his mental and physical health, in which the only consolation, luxury Swiss watches aside, comes from a combination of regularly skinning up and religious faith. “Holy blood of Christ,” he says on the wracked Do Better, “you never let me down.”

You do sometimes wonder if he wouldn’t be better off leaving Twitter and ignoring the comments sections rather than scanning them for slights. The kind of when’s-International-Men’s-Day? dimwit who takes to social media to decry as racist Stormzy’s bursary to help underprivileged black kids study at Cambridge is probably best ignored rather than responded to in song. And there is a distinct and affecting tang of realism to his stories of visiting a therapist, and feeling disquiet about his role as a political figure: “I don’t want no bloody stripes for it,” he protests on One Second. The same goes for the self-lacerating depiction of a failed romantic relationship on Lessons.

What Heavy Is the Head doesn’t do is the one thing you might have expected it to: train its sights on success in the US. One Second features a vocal from Grammy-winning American singer-songwriter HER, but elsewhere the guests are resolutely British, as are the lyrical reference points. “I still keep some dragons with me like I’m Peter Jones,” Stormzy offers at one juncture, while Headie One’s appearance on Audacity contains the memorable car-related boast “I just done 100 through Canterbury”, and Aitch contributes a scene-stealing Manc-accented rap to Pop Boy. The music, too, speaks loudly about growing up in early- to mid-00s Britain. Rainfall interpolates the chorus from Shackles (Praise You) by Mary Mary, one of the few straight-ahead gospel tracks to overcome traditional British squeamishness about musical God-bothering and make the UK Top 10. Rachael’s Little Brother samples its hook from Baby Boy, a 2003 hit by dimly-remembered UK pop-rap collective Big Brovaz. The black empowerment message of Superheroes, meanwhile, is underscored by oddly melancholy music, which turns out to be based on British R&B singer Keisha White’s theme tune to tween-friendly CBBC series The Story of Tracy Beaker.

Perhaps more important than its references to the era when Stormzy was a tweenager himself is how perfectly balanced the music on Heavy Is the Head is. It shifts from the soft-rock-ish electric piano of Lessons to the flatly brilliant assemblage of lo-fi samples and warped vocal effects of Handsome, but it consistently hits a sweet spot. It is packed with memorable hooks – singles Vossi Bop and Wiley Freestyle are by some distance the least obviously commercial things here – but never sounds obvious or craven in its desire for chart success. Along the way, you get a lot of Stormzy the crooner, his charmingly untutored style contrasting with the melismatic fireworks of vocalist Yebba on Don’t Forget to Breathe. Not even the standard criticism that it’s a couple of tracks too long can detract from the feeling that it’s going to replicate its predecessor’s success. If its author is an uncomfortable with his fame as Heavy Is the Head regularly suggests, his discomfort looks set to last a lot longer.