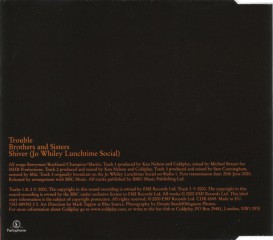 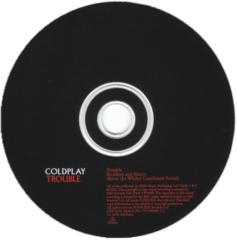 "Trouble" was released as the third single off Coldplay's debut album Parachutes (2000) ,on 26 October 2000 in the United Kingdom, and more than a year later on 18 December 2001 in the United States.

It reached number 10 on the UK Singles Chart, making it the band's second top 10 single in the country. Although "Trouble" failed to chart on the United States, the music press deemed it almost as successful as its predecessor, "Yellow". In Iceland the song peaked at number 1. Two different music videos for the single were released.

The band wrote the song and co-produced it with British record producer Ken Nelson. The song's arrangement is built around the acoustic piano.

An associated EP titled Trouble – Norwegian Live EP was released in the summer of 2001, consisted of five tracks recorded live by the band at Rockefeller Music Hall in Oslo, Norway.

According to Coldplay's lead singer Chris Martin, the song's writing was inspired by his own behaviour. Martin recalls, "There were some bad things going in our band ... the song is about behaving badly towards somebody you really love and I was certainly doing that to some members of the band." He added that he supposed it was about time to stop acting like a knobhead. The four members of Coldplay are credited as co-writers of "Trouble".

British record producer Ken Nelson and the band produced "Trouble" for their debut album, Parachutes. The track was recorded four times before the band got the take they preferred. The backing track was first recorded, and each time they add to see if it was working. They, however, decided that the first three versions were not "working". The last take was recorded into Pro Tools with a shaker to provide the rhythm to the track. For the backing track, Will Champion played the drums and Martin on the piano which they recorded in a little wooden room. After Guy Berryman's bass was recorded, guitarist Jonny Buckland added the guitar section. In recording the piano section of the track, the band used two microphones—one was brighter-sounding and the other had a fuller sound. Nelson, who wanted to keep the song simple, chose the fuller sound microphone for the mixing.

"Trouble" was mixed in New York by American mix engineer Michael Brauer. The initial mixed version, which was sent back to the band and Nelson, fell short of their desired quality, so it had to be redone. According to Nelson, "the vocal was overcompressed and the piano was too bright". Despite this, Nelson did not blame Brauer because he was recording the album when the track was being mixed.

The song's lyrics have "softer emotional themes", including apologies, unrequited love, and longing. Its musicscape follows the minimalistic approach. "Trouble" is built around a piano, with a snare drum background that was mixed very low. The snare drum section tends to be inaudible when the guitars come in. According to the sheet music published by Musicnotes, Inc., the song's time signature follows the common 4/4, with a tempo of 70 beats per minute. Martin's vocal range in the song spans from F♯3 to A4, the highest note being sung using the falsetto register, despite the fact Martin can reach this note in full voice.

As they have for their other songs, Coldplay has refused to accept several offers to use "Trouble" for promotional tools. In 2004, the band rejected a multi-million Euro offer from Diet Coke and Gap to use the song and "Don't Panic", the fourth single from the album. They asked manager Phil Harvey to not refer such offers to them because "a discussion might lead to compromise". American actor Sylvester Stallone was interested to use the song for the soundtrack of his 2001 film Driven, but the band declined. The song was used in the season 1 finale of the FX television series The Shield.

The original European version of the music video for "Trouble" was directed by British director Sophie Muller. The video footage was shot in a Newhall, California ranch. A Wild West-themed video, it features Martin as a prisoner in a dark warehouse, tied with ropes to a chair, being circled by cars in the freezing cold. The other members of the band are seen on the upper floor in a slow motion sequence where Buckland and Champion struggle with bass guitarist Guy Berryman, tying him to another chair and forcing him to look in front. At this point, Martin's struggling causes his chair to tip over, and he hits the ground on his side. He sings the final line of the song ("They spun a web for me..."), before the darkness abruptly turns to daylight. A beautiful sunrise is then revealed, but as the camera pans out, it is revealed to be fake and part of a large theatre backdrop, with Martin still lying on his side, tied to the chair.

A US version of the music video was directed by Tim Hope. The video employs a dream-like animated world, with woodland glades, cartoon flowers which bloom instantly and the air full of clockwork-like insects and birds, but with real people embedded within it. On top of a mountain, a woman (Nerys Davies) waters plants inside a house. The band are aboard a horse carriage that travels through a rural landscape. A small coloured bird flies from the carriage up to the house, lands on the woman's windowsill and flaps its wings as if delivering a message. It transforms into a crow and then into a huge black menacing bird. The bird flies over the house and turns into a black cloud, which pours rain onto the land. The rain burns holes on the things it falls on, and crow feathers protrude from the holes. Finally a tornado lifts up the house, spinning it across the sky and then dropping it precisely on a normal suburban street. The video's acclaimed visuals earned Hope an MTV Video Music Award for Best Art Direction in 2002. It was also nominated for Breakthrough Video.

Album Review
"Trouble" was a commercial success. It reached number 10 on the UK Singles Chart, making it the band's second top 10 single in the United Kingdom after "Yellow". The performance of "Trouble" has been attributed to the "colossal home sales" of Parachutes in the United Kingdom.

The positive reception of the single continued when the British outfit Lost Witness made a remixed version of the song, which was released and became "an unlikely dance floor anthem". With three singles successfully released, the band decided to abandon their initial plans of issuing "Don't Panic" as the fourth single of the album, deemed enough for a single album in the United Kingdom. "Don't Panic", however, was eventually released in some European regions.

In the United States, the single's chart performance was nearly as successful as that of "Yellow"'s. It has reached number 23 on the Billboard Adult Top 40 and 28 on the Billboard Modern Rock Tracks. Martin has claimed that the single had saved them from being a "one-hit wonder" band. The band, thinking it was not a "great single", surmised it would not perform well in the United States.