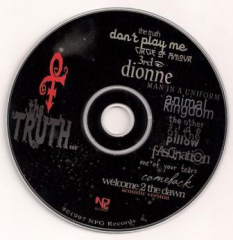 Click yellow EDIT Button add one in English or another language

Album Review
Prince’s fans had long been hoping he would release an acoustic album. The Truth was recorded in 1996 at Paisley Park and was intended to be released by EMI Records in 1997 as a standalone album.

He wrote Comeback to lament the passing of his son Amiir in October 1996, the song was played at Prince’s own funeral on 23 April 2016.

Due to EMI’s bankruptcy that year it was immediately decided for The Truth to receive a limited commercial release, these plans were also abandoned and it was instead packaged as a companion CD to the Crystal Ball triple disk set in 1998 and distributed under Prince’s label NPG Records, released as Prince under the name of The Artist Formally Known As Prince.