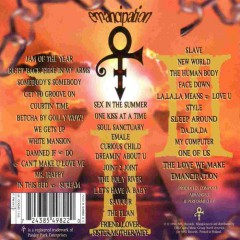 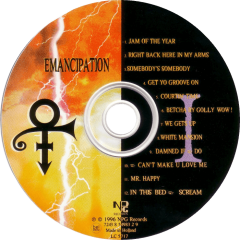 Emancipation is the nineteenth studio album by American recording artist Prince. It was released on November 19, 1996 by NPG Records and EMI Records. The title refers to Prince's freedom from his contract with Warner Bros. Records after 18 years, with which he had a contentious relationship. The album was Prince's third to be released that year (along with Chaos and Disorder and the soundtrack album of the Spike Lee movie Girl 6), which made 1996 one of the most prolific years for material released by Prince.

Overview
Emancipation is something of a concept album, celebrating his release from Warner Bros. as well as his marriage to Mayte Garcia, who became his wife on Valentine's Day earlier that year. With his newfound creative freedom, Prince experimented more openly with varying genres, including house and blues. Prince also freely commented on his fame and dealings with Warner Bros. ("White Mansion"; "Slave"; "Face Down") while also returning slightly to the "computer" theme he explored a decade earlier ("Emale"; "My Computer").

"Jam of the Year" is the opening song on the album. It features Prince, singing in his falsetto range, and Rosie Gaines on backing vocals. It later became the name of the tour for the album, and a live version of the song was released as part of a single called "NYC Live" in 1997.

Prince wrote several songs and ballads dedicated to his wife, Mayte Garcia, and his unborn child, most of which appear on the second disc of the album. The child, born in October 1996 (about 1 month before the album's release), suffered from Pfeiffer syndrome type 2, a rare skull disease, and died shortly after birth. A recording of the child's heartbeat is featured as part of the percussion of "Sex in the Summer".

The album is notable for its format: it consists of three discs, each containing 12 songs with exactly 60 minutes per disc. Prince insinuated to the press at the time that the number of songs, discs and length of the album had a connection with the Egyptian pyramids.

Response
In the United States, the album debuted at number 11. Though not a major seller, it did sell over 500,000 copies, and being three discs, it was qualified to being certified double platinum (the RIAA certifies based on amount shipped rather than sold). Emancipation is the fourth-best-selling triple album ever in the United States.

The subsequent Jam of the Year Tour was a major success (though very few songs from Emancipation were included in the concerts, and the vast majority of the album's tracks remained unperformed), resulting in a significant comeback for Prince, after the commercial and critical disappointment of Chaos and Disorder from earlier that year.

Album Review
Writing the book for the young turks of a reborn, historically hip r&b--three disks and hours of liberation, hubris, divine superfluity, and proof that he can come all night even if by six in the morning it takes too long and he never actually gets hard. Yet although there's not a bad track in the 36, I bet he himself would have trouble remembering them all, and hear nothing that tops the Delfonics and Stylistics covers, which latter wasn't the debut single for nothing and flopped anyway. Great grooves abound, however. As does great singing. Harmonies too. Did I mention that the horns are surprisingly cool? And hey, the little guy has a sense of humor.