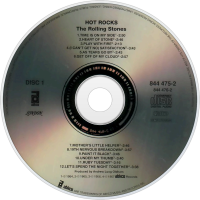 This two-LP/two-CD set is both a lot more and a bit less than what it seems. It is seven years' worth of mostly very high-charting -- and all influential and important -- songs, leaving out some singles in favor of well-known album tracks, and in the process, giving an overview not just of the Rolling Stones' hits but of their evolving image. One hears them change from loud R&B-inspired rockers covering others' songs ("Time Is on My Side") into originators in their own right ("Satisfaction"); then into tastemakers and style-setters with a particularly decadent air ("Get Off of My Cloud," "19th Nervous Breakdown"); and finally into self-actualized rebel-poets ("Jumpin' Jack Flash," "Midnight Rambler") and Shaman-like symbols of chaos. On its initial release, Hot Rocks sold well, not only as a unique compilation but also as a panorama of the 1960s. The only flaw was that it didn't give a good look at the Stones' full musical history, ignoring their early blues period and the psychedelic era. There are also some anomalies in Hot Rocks' history for the collector -- the very first pressings included an outtake of "Brown Sugar" featuring Eric Clapton that was promptly replaced; and the original European CD version, issued as two separate discs on the Decca label, was also different from its American counterpart, featuring a version of "Satisfaction" mastered in stereo and putting the guitars on separate channels for the first time. Those musicologist concerns aside, this is still an exciting assembly of material.