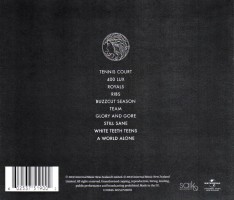 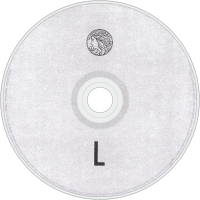 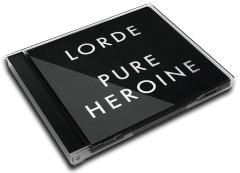 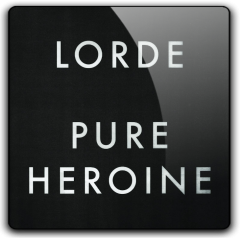 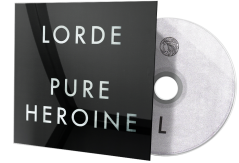 Pure Heroine is the debut studio album by New Zealand singer-songwriter Lorde. It was released on 27 September 2013 by Universal Music. The release of the album came six weeks before Ella Yelich-O'Connor (aka Lorde)'s seventeenth birthday, after being spotted at the age of twelve by A&R scout Scott Maclachlan, who signed her to Universal. Recording for the album started soon after she released her critically acclaimed extended play The Love Club EP in March 2013. Yelich-O'Connor co-wrote the album with its producer, Joel Little. The album was preceded by the release of The Love Club EP single "Royals", which peaked at number one in New Zealand, Canada, and the United States as well as peaking within the top five of Australia. "Royals" was followed by the release of "Tennis Court" in June 2013. In mid-September 2013, the third single, "Team" was released.

Album Review
Pure Heroine received acclaim from music critics, who praised its lyrical content and minimalistic production. At review aggregate site Metacritic, it has an average score of 79 out of 100, based on 28 reviews, indicating "generally favorable" reviews.[76] Jason Lipshutz of Billboard gave the album a score of 94, describing the album as "immaculate" and stating that Lorde was "the most vocally striking and lyrically thought-provoking" artist to breakthrough in recent times. He also compared Joel Little's bass, loops and rhythms, on the album, to the dark electronica of English bands Massive Attack and The xx. Furthermore, Lipshutz called the album "honest and addictive"; stating that "the age of Lorde" had begun.[23] Tom Cardy of The Dominion Post gave the album 4 out of 5 stars, stating that although the album was not "ground-breaking" and didn't offer any "surprises", it was a "pure gold" follow-up to her extended play The Love Club and was a "strong" debut album.[86] David Farrier of 3 News gave a very favourable review of the album, stating that it lives "up to the hype" that its lead single "Royals" created and exceeded expectations. Farrier called Lorde's writing "so good" and praised her maturity; describing the album as "sonically delightful", "utterly unique", and timeless.[87] Joe Cristo of Move gave the album 5 out of 5 stars; calling it "breathtaking" and "flawless". Cristo said the album completely lacked filler tracks and rivaled "every other record that has come out within the last year, and possibly in the last ten [years]."[88]

Lydia Jenkin of The New Zealand Herald stated the album contained "lyrical genius" and "endlessly appealing melodies." Jenkin stated that the album did not offer any surprises, although praised Lorde's vocals; calling her the "new pop heroine."[89] Spin's Maura Johnston offered a somewhat contrasting review of Lorde and her album, suggesting "her age as some sort of clumsy ploy", that "the music is aggressively okay" and "is wash in (possibly fake) teen-pop-star ennui".[85] Stephen Thomas Erlewine of AllMusic gave the album 3 out of 5 stars, stated that Lorde's personality on the album "may be an act" and said that Lorde was dishonest on the album. Erlewine also said Lorde's music was unoriginal, comparing her to Lana Del Rey on several occasions, although praised Lorde's style and "potential."[31] Adam Offitzer of Pretty Much Amazing gave the album a B, stating that the album was "no masterpiece" and said that the tracks during the middle of the album did not have a purpose, but that Pure Heroine was engaging enough to keep Lorde relevant.[90] Pitchfork's Lindsay Zoladz wrote that Lorde "achieves a tricky balancing act of exposing irony and even hypocrisy without coming off as preachy or moralistic," whilst implying that the music deftly depicts pompous characters.[82] Evan Sawdey of PopMatters said "Pure Heroine remains a lush, engaging experience. Lorde’s sudden international success is most welcome in such an overcrowded, singles-oriented marketplace as we have today."[91]