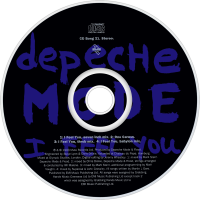 "I Feel You" was Depeche Mode's 27th UK single, released on 15 February 1993, and the first single for the then-upcoming album Songs of Faith and Devotion. The song peaked at number 8 on the UK Singles Chart and also made number 1 and number 3 on the US Modern Rock Tracks and Hot Dance Music/Club Play charts, respectively. It was the band's highest charting single worldwide. The song is ostensibly about 'connection' between two individuals.