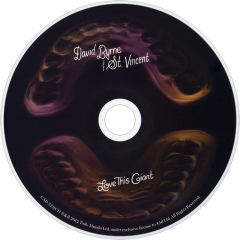 Love This Giant is a studio album made in collaboration between David Byrne and St. Vincent, released on 4AD and Todo Mundo on September 10, 2012, in the United Kingdom and a day later in the United States. Byrne and Annie Clark of St. Vincent began working together in late 2009, using a writing and promotion process that Byrne had previously used on his 2008 collaboration with Brian Eno Everything That Happens Will Happen Today. The duo had previously played together live at a St. Vincent show and on the album Here Lies Love. The performers enlisted a variety of brass musicians to augment their songwriting and have embarked on a tour to promote the album.