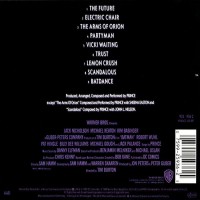 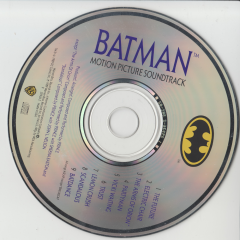 Batman is the eleventh studio album by musician Prince and the soundtrack for the 1989 film Batman. As a Warner Bros. stablemate, Prince's involvement in the soundtrack was designed to leverage the media company's contract-bound talent as well as fulfill the artist's need for a commercial (if not critical) revival. The result was yet another multi-platinum successful cross-media enterprise by Warner Bros., in the vein of Purple Rain. The album was placed #1 on Billboard's album chart for six consecutive weeks. It sold nearly three million copies in the United States alone.

Album Review
Having wanted to include 1999 and Baby I’m A Star in his new movie Batman, director Tim Burton asked Prince to re-record these songs or provide entirely new replacements for the soundtrack.

Following his meeting with Burton at Pinewood Studios in London, Prince wrote two replacement tracks, Rave Unto The Joy Fantastic and 200 Balloons, but recorded an entire album instead – neither of the new songs appearing on the final album. Much of the album was written during the Japan leg of the Lovesexy Tour, which he could not wait to wrap up and return to Paisley Park Studios to record. Batman is an entirely solo project, and became at the time of its release the fastest selling album in history, selling 1 million copies in its first week – eventually million in total.

Batman became Prince’s biggest success since Purple Rain, being certified double Plantinum by the RIAA, yet despite this licensing constraints with the character’s trademark dictate no songs from the Batman soundtrack can be included in other compilation releases. The album is considered to have revived Prince’s career in America due to the muted success of the previous release, Lovesexy.