Track List
01) Converted
02) Speed of the Sound of Loneliness

03) Woke Up This Morning 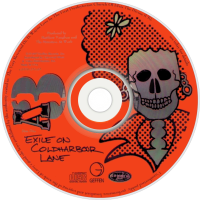 While it wasn't a delayed smash hit on the level of the Proclaimers' "I'm Gonna Be (500 Miles)," when the loping, ominous "Woke Up This Morning" was selected as the theme for The Sopranos, the surprise success of that TV series meant that A3 finally got some American attention, a year after the release of this album, the band's debut. Exile's attempt to be the next Screamadelica, evincing the same blend of techno, Stonesy rock, and gospel, doesn't quite play out as well as Primal Scream's masterpiece. While Exile recombines its influences into each song rather than shifting from tune to tune like Screamadelica, like many fusion attempts, things sometimes fall right down the middle instead of achieving a new and striking synthesis. It comes pretty close, though, and compared with something like Moby's overrated genre exercise Play, Exile is much less self-conscious and serious, thanks to some drawling between-song skits and amusing semi-raps. Vocalist Larry Love has a good mid- to deep-level voice, investing his often witty tales of life, music, and good lovin' with a husky world-weariness à la Lee Hazlewood. Equally notable is the Mountain of Love's harmonica work, which he interweaves through all the songs without overpowering the rest of the band or pointlessly showing off. The rest of the band get in some good grooves here and there, never completely standing out but still giving it a good effort. Definite highlights include the brilliantly titled tear-in-my-beer lament "You Don't Dance to Techno Anymore," the electro-Marx-house combination of "Bourgeoisie Blues," and the twangy romp "The Night We Nearly Got Busted."