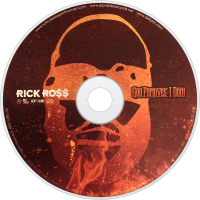 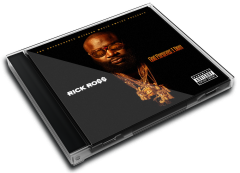 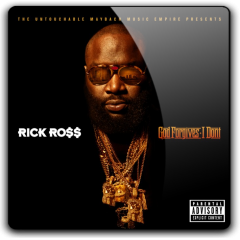 God Forgives, I Don't is the fifth studio album by American rapper Rick Ross, released on July 30, 2012, by Mercury Records. It was produced by several record producers, including Cool & Dre, J.U.S.T.I.C.E. League, Pharrell, Jake One, and Rico Love, among others.

Upon its release, God Forgives, I Don't received generally positive reviews from music critics, who complimented its opulent production style and Ross' performance. It debuted at number one on the US Billboard 200 chart, selling 218,000 copies in its first week, and charted in several other countries. As of October 2012, the album has been certified gold by the Recording Industry Association of America and has sold 438,000 copies in the United States. The album was nominated for a Grammy Award for Best Rap Album, set to be presented at the 2013 Grammy Awards.

User Album Review
Known to many UK listeners as a gravel-voiced guest on innumerable rap hits, Rick Ross has enjoyed considerable stateside success for several years. His 2006 debut, Port of Miami, topped the Billboard 200, as did 2010’s Teflon Don – but Don’s UK peak of 169 says everything about Ross’ profile on British shores at the time.

God Forgives, I Don’t, his fifth album proper, represents a game-changer. A UK top 10 hit, it has engaged with a newly receptive public. Whether they’re turned on by Ross or his impressive roster of collaborators – Dr Dre, Jay-Z, Drake and Ne-Yo amongst them – matters not, as this is the Florida rapper’s bona-fide international breakthrough.

God Forgives finds its headliner on typical balls-and-braggadocio form – but the numbers concerned with the acquisition and exhibition of wealth are fairly forgettable. 911 is a tired celebration, via some shady vocational activities, of the titular motor; and near-sound-alike Hold Me Back is an aggressive but hollow rant about people Ross doesn’t like much.

Slower cuts can lack standout qualities: Touch ‘n You, with Usher, is a forgettable piece about impressing a lady with money and cars, and Drake snoozes through the soggy Diced Pineapples. But there are plenty of reasons why this set’s been well received critically – its first half contains some of the brightest mainstream hip hop of 2012.
3 Kings is a brilliant track where Ross’ rhymes are topped and tailed by turns from Dr Dre and Jay-Z – impressively, Ross holds his own beside two greats. Jay-Z is particularly imperial, references to several-zeros deals backed by the reality of the empire he’s built – an empire that Ross has done much to emulate.

Ross is no Jay-Z yet – and nor is he today’s Notorious B.I.G., who he carefully compares himself to on Pirates. But he’s rising, still, and God Forgives’ best moments – Ashamed, Ten Jesus Pieces, Amsterdam, the André 3000-starring Sixteen – are fine examples of how big-budget rap can skilfully avoid crass clichés, and even convey no little emotion. These tracks point to further success, and perhaps a UK chart-topper in album six.