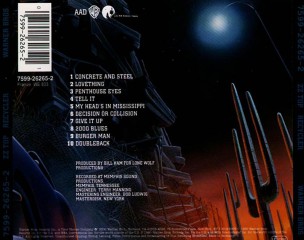 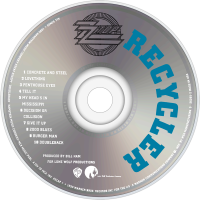 Recycler is the tenth studio album by American blues rock band ZZ Top, released in 1990.
The band had a cameo in the 1990 movie Back to the Future Part III playing an "old west" version of "Doubleback" along with some local musicians. (The regular version of the song plays over the credits). The music video for "Doubleback" also had clips from the movie and was included on the DVD. The album spawned three hits in the form of "Doubleback" (#1 on the Album Rock Tracks for 5 weeks), "Concrete And Steel" (#1 on the Album Rock Tracks for 4 weeks), and "My Head's In Mississippi" (#1 on the Album Rock Tracks for 6 weeks).
Music videos were also made for "My Head's in Mississippi", "Burger Man" and "Give It Up".
In the UK, it was the band's third album to be certified by the British Phonographic Industry, attaining Silver (60,000 units) in 1990. To date, this is the last studio album to achieve UK certification.
The song "Tell It" marks the first instance of a song in a which a sampled clip of a distinctively-toned saying of the word "fine" is used, which was later featured again on the song "Lizard Life", off Antenna, the band's next album, and even in a performance of the song "Cheap Sunglasses" on the Live from Texas album.