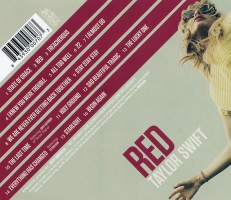 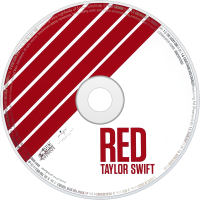 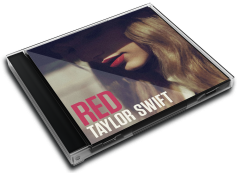 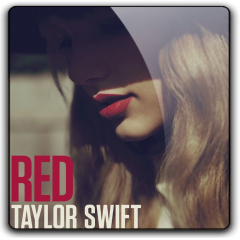 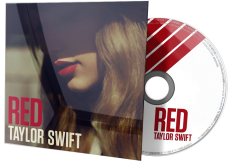 Red is the fourth studio album by American singer Taylor Swift. It was released on October 22, 2012 through Big Machine Records, as the follow-up to her commercially successful 2010 album Speak Now. It was announced through Swift's live webchat on August 13, 2012, in which she revealed the album title and album cover, and answered fan questions. Four promotional singles were released in the month leading up to the album release, three of which debuted inside the top ten of the U.S. Billboard Hot 100. The album features collaborations with new producers and guest artists such as Gary Lightbody and Ed Sheeran, and sees Swift experimenting with new musical genres.

The album's lead single, "We Are Never Ever Getting Back Together", was a worldwide commercial success, topping the iTunes charts all over the world and selling 623,000 copies in the first week, becoming Swift's first ever Billboard Hot 100 chart-topper after vaulting from 72 to number one and staying atop for three weeks. The second single, "Begin Again", was released on October 1. "I Knew You Were Trouble" was released as the third official single (promoted, like "Begin Again", from promotional single status) on November 27, 2012, becoming one of Swift's highest charting singles in both the UK and the US. "22" will be released as the fourth single from the album in March 2013.

Red has also spawned three other promotional singles, all of which reached top 15 on the Billboard Hot 100 chart. Red has been mostly acclaimed by music critics, who praised Swift's versatility as a musician and enjoyed her experiments with new music genres. Red sold 1,208,000 copies in its first week in the U.S., debuting at number one on the Billboard 200 chart, the second-highest debut for a female artist, behind Oops!... I Did It Again by Britney Spears. Red is also Swift's first chart-topper in the U.K., and also topped the album charts in Australia, Canada, Ireland and New Zealand. The album sold 1.89 million copies in its first three weeks, surpassing One Direction's Up All Night as the second biggest-selling album of the year in the U.S.

User Album Review
Like Kanye West, Taylor Swift is a turbine of artistic ambition and superstar drama. So it’s no surprise she manages to make her fourth album both her Joni Mitchell-influenced maturity binge and her Max Martin-abetted pop move – and have it seem not just inevitable but natural.

Red is a 16-song geyser of willful eclecticism that’s only tangentially related to Nashville (much like Swift herself at this point). The album pinballs from the U2-tinged liftoff of “State of Grace” to the dubstep-y teen pop of “I Knew You Were Trouble” to “The Last Time,” a sad piano duet with Gary Lightbody of Snow Patrol. Swift’s bedrock is driving, diaristic post-country rock – see the breakup flashback “All Too Well,” where she drops the great image of “dancing around the kitchen in the refrigerator light” with her ex.

Part of the fun is watching Swift find her pony-footing on Great Songwriter Mountain. She often succeeds in joining the Joni/Carole King tradition of stark-relief emotional mapping: “Loving him is like trying to change your mind once you’re already flying through the free fall,” she sings on the simile-monsoon title track, where banjos and vocoders make out like third cousins. But whether she’s real-talking Jake Gyllenhaal (“We Are Never Ever Getting Back Together”) or fantasizing about crashing “a yacht-club party” that sounds uncannily like the Kennedy bash she attended with her current future-ex-boyfriend Conor (“Starlight”), her self-discovery project is one of the best stories in pop. When she’s really on, her songs are like tattoos.