Tempo of the Damned 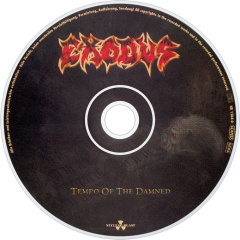 Tempo of the Damned is the sixth studio album by American thrash metal band Exodus. Released on February 2, 2004 via Nuclear Blast, Tempo of the Damned was Exodus' first studio release since 1992's Force of Habit. It was the last appearance of longtime vocalist Steve "Zetro" Souza until his return for 2014's Blood In, Blood Out as well as the last appearance of founding drummer Tom Hunting until 2007's The Atrocity Exhibition... Exhibit A. The album was also the last studio appearance of guitarist Rick Hunolt.

Tempo of the Damned is the first Exodus studio album to accredit founding guitarist Kirk Hammett for a song, ("Impaler").

This album was released two years to the day after the death of former member Paul Baloff.

Although he produced the band's 1997 live album Another Lesson in Violence, this album was the first time Andy Sneap had produced, mixed, engineered or mastered an Exodus studio album; he would provide either role on the band's subsequent albums.