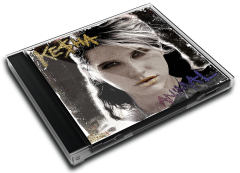 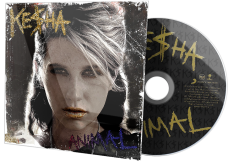 Animal is the debut studio album by American pop singer Kesha. The album was released on January 1, 2010, by RCA Records. Kesha worked with a variety of producers and writers such as Lukasz Gottwald (Dr. Luke), Benny Blanco, David Gamson, Greg Kurstin, Max Martin, and others. Kesha had been recording demos for several years when one eventually ended up in the hands of Samantha Cox, senior director of writer/publisher relations at BMI. Cox passed along the demo and it ended up in the hands of Gottwald, who decided to have Kesha perform on the song "Right Round". Within two months, the song became a hit in multiple countries around the world. The event led to Kesha being sought after by many major labels, and she eventually signed a multi-album deal with RCA Records.

The album received mixed reviews from music critics. Some appreciated its fun, carefree nature, while others dismissed it as juvenile and said that it seemed insincere. The use of Auto-Tune on the album to alter Kesha's voice was called fun by some critics, while others found it irritating and said it made it difficult to tell if Kesha could actually sing. Lyrically, the majority of the album's songs are based on Kesha's past life experiences of love, heartbreak, boys, and having a good time. Musically, Animal draws from the dance-pop genre, while incorporating elements of electro and electropop in its production and beats. The album attained chart success, debuting at number one in Canada, the United States, and Greece, while charting within the top ten in seven other countries. Animal was certified platinum by the Recording Industry Association of America (RIAA) for shipments of one million copies and has sold over 3 million copies worldwide.

Four singles were released from the album. Its lead single, "Tik Tok", was released on August 7, 2009 and was a worldwide hit, reaching number one in eleven countries. It reached number one on the Billboard Hot 100 and stayed at the top for nine consecutive weeks. The song sold 12.8 million digital copies worldwide in 2010, making it the best selling single of the year; it sold 5,633,000 downloads in the United States alone, making it the sixth best-selling song in digital history. The album's second, third and fourth singles, "Blah Blah Blah", "Your Love Is My Drug" and "Take It Off" all achieved similar success reaching the top ten in multiple countries including Australia, Canada and the United States.

The album's commercial success led to its nomination for the Juno Award for "Best International Album" in 2011.

Album Review
Anyone who has enjoyed the woozy charms of Ke$ha’s global hit Tik Tok, or the equally pie-eyed follow-up Blah Blah Blah may find themselves wondering if she can sustain her drunk girl shtick for an entire album.
The fact that there’s a song here called Party at a Rich Dude’s House will not alleviate this concern one bit. Actually, it’s not that bad. The musical extremes on offer here can be mapped out in a triangle, with Kelly Clarkson at one corner, Princess Superstar in another, and Fergie in the third. So you get rocked-up songs about being a dirty stop-out; poppy dance songs about being a dirty stop-out; and power ballads about feelings.
The revelation is that Ke$ha can really properly sing, and she does. Stephen, a vulnerable ode to an unreliable crush, begins with beautiful layered a cappella harmonies. Sure, it tumbles into clunky pop straight afterwards, but then, that also seems to be what she does: beautiful things are bashed against ugly things, pretty melodies ruined by silly noises, emotional lyrics stuffed with buzzwords. Brilliantly, the most heartfelt moment on the album, the huge ballad which shows off her impressive bellow off to its best advantage, and the song which should take her furthest from her infamous party animal persona, is called Hungover.
Clever and stupid, in equal measure: that’s the Ke$ha way. Best of all is D.I.N.O.S.A.U.R., which could’ve been especially created to drive rock-bores into a state of spluttering fury. It is made of nothing but sugar and sass and additives, a song from a young girl to an older man who is attempting to pick her up in a club. All she has to offer him is a scattergun spray of insults, and cutie-pie whistling. It’s childish and Parental Advisory Required at the same time, and is going to infuriate any adult within hearing range.
That’s basically what Ke$ha is for. She’s a poster girl for youth gone wild, and to do that properly, you’ve got to be as annoying as you are charming. She does it properly.