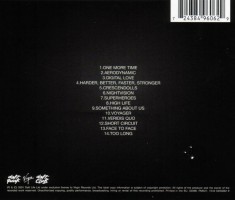 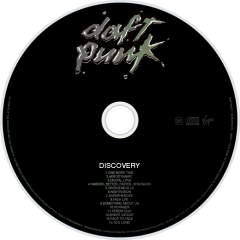 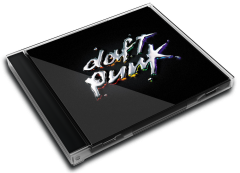 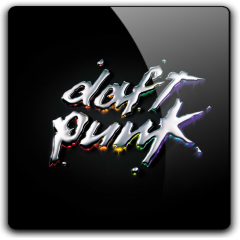 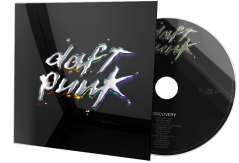 Discovery is the second studio album by the French house duo Daft Punk, released in March 2001. It marks a shift in the sound from Chicago house, which they were previously known for, to disco, post-disco and synthpop-inspired house. The album provided itself as a soundtrack to the anime film Interstella 5555: The 5tory of the 5ecret 5tar 5ystem, which was a collaboration between the creators of the album, Leiji Matsumoto, and Toei Animation.
All of the music videos for the tracks on the album are segments of the film. Interstella 5555 follows a story of a kidnapped extraterrestrial band. Discovery is recognized as a concept album in reviews by New Musical Express and Spin magazines. Early versions of the album included a "Daft Club" membership card. The card included a code which granted access to an online music service, which featured tracks later released on the album of the same name and Alive 1997.

Album Review
French duo, Guy-Manuel de Homem-Christo and Thomas Bangalter had first burst upon the dance world in 1995 with their hit “Da Funk” ”“ a tasty homage to Chicago Techno with a typically Gallic twist. The attendant album, Homework proved to be more of the same. So, four years later it came as some surprise when Discovery arrived; chock-full of, well”¦disco pop. Luckily it was even better.
Morphing (like the power rangers they resembled) into gleaming house robots for their publicity shots, the techno twins had spent the hiatus crafting something at once nostalgic and futuristic ”“ stating that Discovery was their attempt to summon up the innocence of a child’s approach to music (ie: a ten-year old had no snobbery about the dreaded word ‘disco’ ”“ cleverly contained in the title). To do this they blended a selection of late 70s and early 80s tunes (George Duke, Sister Sledge, Barry Manilow etc.) with wonderfully retro vocoder-style effects and some metallic guitars. The formula worked like a dream and even made them household names in the States.
The key element to Discovery is fun. From the opening smash “One More Time” (featuring New York new-garage legend, Romanthony, on vocals) to fifth track, “Crescendolls”, the album’s a rollercoaster ride of cheese and choons. Second hit, “Harder, Better, Faster, Stronger” is a masterpiece of relentless synth splurge, like Kraftwerk in kindergarden while “Digital Love” is simply gorgeous pop. Only the needlessly ambient “Nightvision” slows the pace. The second half’s a more mixed bag (you do grow slightly weary of the tinny-AM-radio-into-monster-floor-filler trick that virtually every track uses), though still dotted with gems such as the penultimate “Face To Face”.
The final icing on the cake was the cinematic tranformation of the album into the soundtrack for the charming Interstella 5555 ”“ Daft Punk’s tribute to anime director and hero, Leiji Matsumoto (who produced the film). The blend of children’s TV sensibility and glistening house made perfect sense, and the band have never bettered its coherence of vision or joyful playfulness. Daft, maybe, but for a while the world was a brighter place for it.